'Pokemon GO' Battle League Season 8 Guide and Rewards: How to Get Through, Receive Free Pokemon 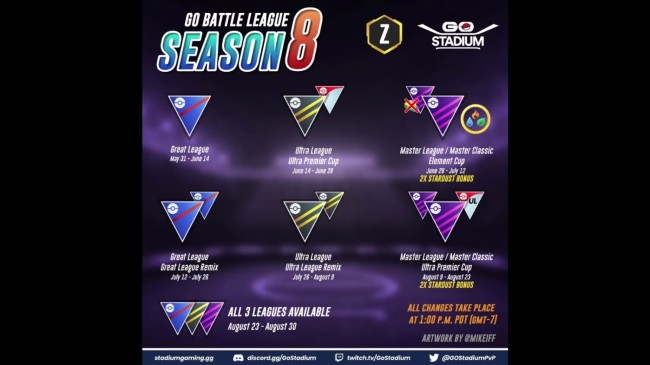 Pokemon GO starts the new Season 8 of its Battle League with new features, rules, and rewards that players will look forward to.

Niantic, the developers of the game, announced the schedules for the Battle League, particularly the dates for each League cup, which some of them will last for one or two weeks. These schedules was first published in an article made by Optiflux.com.

Get ready for the most exciting season of the #GOBattle League yet! Season 8 will see the return of GO Battle Nights, a powerful Pokémon to encounter, and new exciting cups! https://t.co/jN0TNfEmZ4#GOBattle

The Battle League will culminate with all of the 3 Leagues - the Great League, the Ultra League, and the Master League - simultaneously happening from August 23rd to August 30th.

All in all, Pokemon GO's Battle League will happen in the span of 3 months. According to Bleedingcool.com, the League's Season 8 will happen at 1:00 PM PDT.

As you progress and rank up within this season's Battle League, you will also reap rewards in a form of free Pokemon as exclusive encounters will be imminent within the said League season in Pokemon GO.

Opticflux.com listed down the rewards for every rank up - You will receive Machamp in Rank 1, Macho, Sableye, Ariados, and Snover in Rank 2, Mienfoo in Rank 5, Toxicroak, a male Frillish, and a Stunfisk in Rank 10, Skarmory, Rufflet, and Scraggy in Rank 15, a Legendary Pokemon that is available in a five-star raid at that time in Rank 20, Gible in the Veteran Rank, Deino in the Expert Rank, and Pikachu Libre in the Legend Rank.

You can also obtain any Pokemon from previous ranks if you reach Rank 5 up to the Expert Rank.

The Season 8 of the Battle League will motivate every Pokemon GO player to bring their A-game and their best Pokemon team. PvPoke.com listed down the top 25 Pokemon that is perfect for the said season, which included a Medicham (XL) being on the top of the list followed by Stunfisk (Galarian), Azumarill (XL), Altaria, and Bastiodon (XL).

You can see the list that you can use while composing for a Pokemon Team of your own for the Battle League here.

You can also consider Dualshockers.com's suggestions for your team in their guide, where they put their personal picks for teams that you can use. One of their suggeseted team composition involves the Water-type Azumarill (XL), the Ground/Steel-type Stunfisk (Galarian), and the Grass/Ice-type Abomasnow (Shadow).

According to them, this team will cover a lot of bases as Azumarill has been a staple in the Great League, while Stunfisk established itself over the previous seasons and Abomasnow provides strong coverage against Water-type Pokemons.

In terms of the rewards for every Rank up, especial for the previous Season 7, Bleedingcool.com has a tip - prepare for a possible beneficial glitch. According to their guide, there has been glitch that rewards players with Pokemon that came from the rank above them.

This glitch can happen if you did not complete your sets before ending the season, and if you end that season in the middle of the set. You can also throw a Star Piece before claiming your Season 7 rewards.