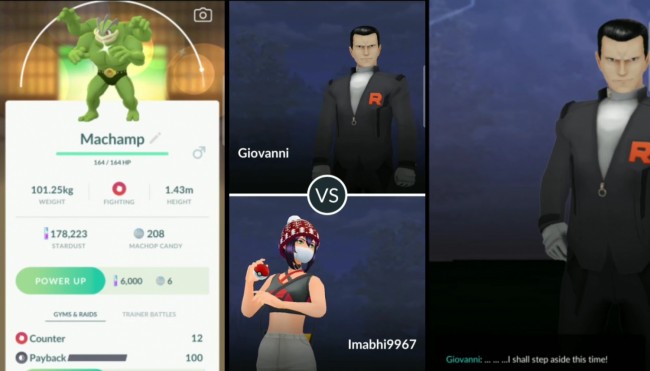 The dark clouds will ascend throughout Pokemon GO as players will encounter the big boss of the sinister Team Rocket, Giovanni, along with a Shadow version of a Legendary Pokemon, within the first half of June.

A recurring boss in the early Pokemon games, Giovanni formed the GO version of his secret criminal syndicate, the Team GO Rocket. Players who encountered him will discover that within his Pokemon lineup lies either one of the Shadow versions of the Legendary Bird Pokemons - Zapdos, Moltres, and Articuno.

He also has a Shadow version of Mewtwo in his lineup.

June Events in Pokémon GO - https://t.co/szpQ5BXnJ1 -
Get ready for a summer like no other!
Stop Giovanni One More Time
Due to a bug ... pic.twitter.com/wxEhP5vSES

According to a guide made by Attack of the Fan Boy, Giovanni has been cycling through these Shadow Legendary Pokemons within his lineup, which he always put in its Slot 3. His first two Pokemon slots are for his signature Pokemon, Persian, and either Nidoking, Kangaskhan, or Garchomp.

Players will be rewarded by a Shadow Legendary Pokemon after defeating Giovanni. This month, players will have a chance to obtain a Shadow Zapdos. But in order to do that, you must first locate him throughout Pokemon Go.

How to get the Super Rocket Radar

In order locate the Team GO Rocket boss, you must have the Super Rocket Radar in your inventory. This essential item can be obtained if you complete "The Higher They Fly..." Special Research.

In the said Special Research, you must complete several steps before obtaining the item. In the first step, you need to accomplish three tasks: you must win a raid, Defeat 3 Team GO Rocket grunts, and Catch 1 Shadow Pokemon.

After you complete Step 1, you will proceed to Step 2, where you will catch 5 more Shadow Pokemon, make 3 nice Curveball throws in a row, and catch 10 Flying-type Pokemon.

You may proceed to Step 3, where you will accomplish three more quests - Purify 5 Shadow Pokemon, Defeat 5 other Team GO Rocket grunts, and earn 3 Candies by walking with your Pokemon buddy.

Once Step 3 is completed, you will be immediately proceeded to Step 4, where you will defeat the three Team GO Rocket leaders - Arlo, Cliff, and Sierra. Once you defeat these three leaders, you obtain the Super Rocket Radar.

Once equipped with the Super Rocket Radar, you will start seeing either Giovanni or his Team GO Rocket grunts at either Poke Shops or in Rocket Baloons.

To look more further about the Special Research quest, you can look at the guide made by Eurogamer.net here.

Before you encounter Giovanni, you must need to prepare your Pokemon lineup that is suitable for countering his Pokemon team, which included the Shadow Zapdos.

As mentioned, Giovanni's team lineup consists of Persian, either Nidoking, Kangaskhan, or Garchomp, and the Shadow Zapdos.

Attack of the Fanboy and Futuregamereleases.com suggested in their guides that you should have Lucario, Machamp, Blaziken, Conkeldurr, Poliwrath, and Breloom. They have "Counter" in their attack lineup as well as other Fighting-type attacks such as "Aura Sphere," "Dynamic Punch," "Power-Up Punch," "Cross Chop," and "Blaze Kick" (in case you have a Blaziken).

You may also consider having a Tyranitar as it also has a critically damaging attack to Persian ("Smack Down" because Normal-type Pokemon like Persian is also vulnerable to Rock-type Pokemon and attacks).

For the second round, in order to defeat either one of Nidoking, Kangaskhan, or Garchomp, just like Persian, you need to consider their weakness.

Attack of the Fanboy's guide consider these Pokemon choices to combat Nidoking - Empoleon, Kyogre, Excadrill, Jiraichi, and Gyarados. Majority of the choices were Water-type Pokemon, which is the weakness for Nidoking, which is a Ground/Poison-type Pokemon.

For Kangaskhan, you may also use the same line-up for countering Persian or you may consider Attack of the Fanboy's Pokemon suggestions - Togekiss, Dragonite, Gyarados, Landorus (Therian), and Lugia.

For Garchomp, you may consider Futuregamereleases.com's choices - Articuno, Glaceon, Gardevoir, and Dragonite. All of these Pokemon are effective against Garchomp, a Dragon/Ground-type, which is weak against fellow Dragon-type Pokemon and attacks as well as Ice-type and Fairy-type ones.

Once you get over through the Second Round, you will be now face the Shadow Zapdos, the last Pokemon in Giovanni's lineup.

In order to combat the Legendary Electric-type Pokemon, you need to prepare Pokemon that are Ground-type, Dragon-type, and Electric-type, or has attacks that are based of said types.

Attack of the Fanboy suggested in its guide that you can have the following - Rhyperior, Garchomp, Zekrom, Mamoswine, and Excadrill, while Marketresearchtelecast.com suggests the addition of Rampardos, Glaceon, Jynx, Terracion, Darmantian, Weavile, and Tyranitar.

Once you defeat the Shadow Zapdos Attack of the Fanboy, you also defeated Giovanni and have a chance to catch the mentioned Legendary Pokemon. If you are still taking up "The Higher They Fly..." Special Research, you will get rewards for beating the said Team GO Rocket Boss.

You can encounter Giovanni with the Shadow Zapdos in Pokemon GO from June 1st to June 17th. From June 17th onwards, Giovanni's Shadow Pokemon lineups will be shuffled.