Epic Games' 'Frostpunk' Giveaway: How to Get this City-Builder for Free 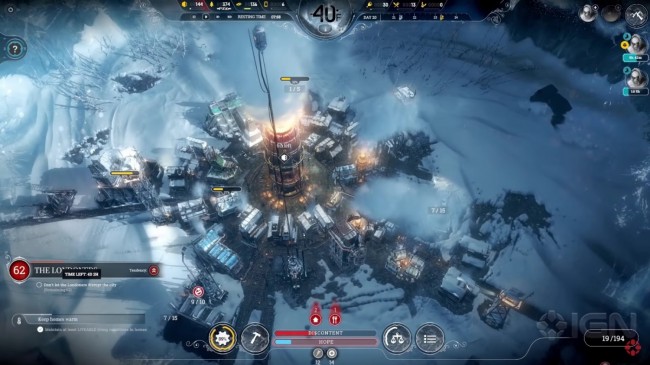 In "Frostpunk," you will build and lead a city to its survival in the post-apocalyptic world. "Frostpunk" is free to grab in the Epic Games Store starting today until June 10th.
(Photo: Screenshot from IGN's "Frostpunk Review")

You may now become the ruler of the last place on Earth as Frostpunk hits the Epic Store shelves for players to get it for free. The digital game store is giving away free games, including Frostpunk, every Thursday.

In their Twitter post, Epic Games said that Frostpunk will be free for players to claim until June 10th.

Released in 2018 for PCs, and one year later, in 2019, for PlayStation 4 and Xbox One by 11 Bit Studios, Frostpunk is a City-builder survival game that will bring you to an alternate late 19th Century dystopic world that was changed after a volcanic eruption that cause a perpetual winter across the earth.

When you build a city on fire, sooner or later, it will turn into ashes.

What will you do to preserve the last city on Earth? Who will you become in the process?

The Vault has opened, and Frostpunk is FREE to claim until June 10 ❄️ pic.twitter.com/ffXExViJrs

In the game, you will be known as "The Captain," the one who is in charge of your city and its people as well as its resources. You will start with a few people and resources that are in your supply crates.

READ ALSO: 'Unreal Engine 5' Early Access: What Games are in Development? What New Features Does it Offer?

From there, your task is to build your city with the resources that you will found while maintaining the survival of its people by keeping them warm and healthy.

Aside from sustaining resources, you will also have the power to maintain a generator, that will warm up your city, while making essential buildings around the said generator such as houses to keep your people sheltered and hospitals.

You can also implement laws for increasing productivity such as allowing forced child labor or a temporary 24-hour shifts for able-bodied workers, and political leanings of every people by choosing either "Order" or "Faith." Either of these two paths will have a type of governance, and fanaticisms, in the end.

You may also execute those whom you think become an "enemy" to your ideals for the city.

Frostpunk also adapted the Technology feature, where you can research for better tools and equipment for your buildings and people, such as better insulation for the houses, strong reactors, a better industrial input, and an even more efficient machinery, as well as you can deploy "Automatons" or mechanized labor.

According to an article by NME, the key for succeeding in Frostpunk is within the decisions that you made for the survival of your people.

Frostpunk also offers you multiple modes and scenarios depending on the difficulty. Clutch Points said in their article that the game's Endless Mode is meant to test your endurance as it sees how long you would last in the game without succumbing to the winter cold.

In a review posted in Rock Paper Shotgun, Xalavier Nelson said that the game forces a "nerve-wracking juggling of priorities" every time you decide while thinking that an impending threat of annihilation will come, causing you to deal with the consequences once missed even the small details.

You can claim your free Frostpunk by visiting the Epic Games Store website, where you can also grab games such as Fortnite, SMITE, Rocket League¸ and World of Warships

Simply go to the "Free Games" tab at the home page of the site, and click the "Free Now" button below. Once you are in the page dedicated for the game, click the "Get" button. You must be logged in before you grab your free game. Once you have placed your order, you can now play Frostpunk.

A point to consider here is that the game that you will be grabbing for free is the Standard Version, and it doesn't come with its downloadable contents (DLCs).

Aside from Frostpunk, a mysterious game will also be up for grabs for free in Epic Games Store, which will be released within today.

For more information regarding the said mysterious game, you can check out Epic Games Store website, epicgames.com/store.

11 Bit Games will release the City-builder Survival game on Android and iOS smartphones through a partnership with NetEase Games. the iOS version of Frostpunk Mobile is set to be released within this year.