'Pokemon GO' 'A Very Slow Discovery' Quest Guide: How to Catch Your Own Galarian Slowpoke and its Evolutions 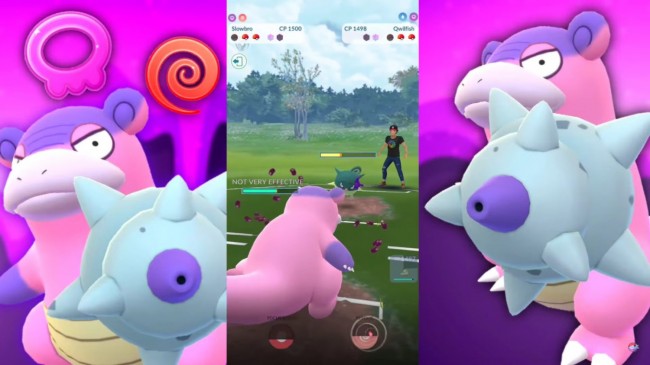 Slow, lax, and often seen dipping its tail in the water to catch food, or a Shellder, Slowpoke is a versatile Pokemon due to its multiple evolutions depending on what part Shellder is biting - Slowbro if its tail is bitten and Slowking if its head is bitten while equipping the "King's Rock."

Pokemon GO is now focusing on this Dopey Pokemon, and its Galarian counterpart, with its "A Very Slow Discovery" event. Players will become chill like the Pokemon in focus because the quest, according to Tech Times, is pretty easy and fast to accomplish.

How to Catch a Galarian Slowpoke

In the "A Very Slow Discovery" event, the Galarian Slowpoke will be appearing in one-star raids, so you need to prepare for possible counters for this Psychic-type Pokemon.  According to Tech Times, you can also encounter this Pokemon in forests, so get your Incense and Lure Module ready as it increases Pokemon spawn rate.

According to a graph from Eurogamer.net, Psychic-type Pokemons, like the Galarian Slowpoke, are weak against Steel-types, Dark-types, and fellow Psychic-types, while they are also vulnerable from Bug-types, Ghost-type, and Dark-types.

With that in mind, you can battle against the Galarian Slowpoke and catch it if it is in its weak state.

Evovle into a Galarian Slowbro

In Pokemon GO, however, you do not need a Galarica Cuff to evolve your Galarian Slowbro to Galarian Slowpoke.

According to BleedingCool.com, you can now evolve your Galarian Slowpoke into a Galarian Slowbro by simply catching 30 Poison-type Pokemon while making it your buddy. Aside from that, you also need 50 Slowpoke Candy for the said evolution

Evovle into a Galarian Slowking

In their post regarding the event, Pokemon GO said that Galarian Slowking's arrival in the game "might be quite...slow." However, several players, including this one who shared on Twitter that he did evolved his Galarian Slowpoke into a Galarian Slowking, had seen ways to do so.

According to DualShocker.com, much like the Galarian Slowbro evolution guide, you must first make your Galarian Slowpoke to be your buddy. Next, you need to catch 30 Psychic-type Pokemon. After that, you need to acquire 50 Slowpoke Candy and the King's Rock.

You can acquire the King's Rock through PokeStops' Daily Bonus streak. You can do the said activity for seven days in order to get the King's Rock, which is classified as a Special Item. You can also acquire it when you pick up an event-exclusive free box in the shop.

Aside from catching your own Galarian Slowpoke collection, "A Very Slow Discovery" also gives other rewards including an exclusive Slowpoke Forever Shirt avatar item, 30 Ultra Balls, and 3,000 XP once you complete the Slowpoke-themed Collection Challenge.

According to their post in the game's website, you can also be given the Slowbro Mega Energy and other rewards from an event-exclusive Field Research. Their in-game shop will also sell Slowpoke-inspired avatar items.