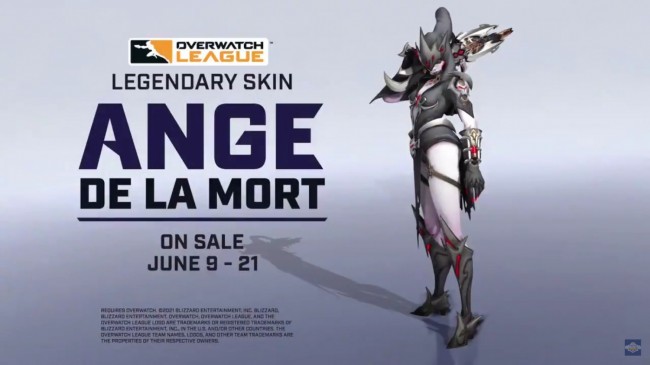 Blizzard has announced that Widowmaker will have a new skin in celebration of the incoming "June Joust" of the Overwatch League this coming June 10th to June 12th. The sleek and sexy femme fatale sniper of Overwatch will receive the legendary "Ange de la Mort" skin, which will be available within this month.

Translated as "Angel of Death" in French and as a reference to her in-game lore, the "Ange de la Mort" skin, according to Forbes, is what the players would get if Widowmaker tries to cosplay fellow Damage character Reaper due to its gloomy aesthetic.

The skin is a mixture of black with gray and red outlines and it has a skull-like buckler in the waist. Her signature spider motif was seen on her chest.

No one can hide from the Angel of Death ⚔

Widowmaker's "Ange de la Mort" skin is the second legendary skin that Overwatch is giving away for their 2021 Overwatch League Season. Last May, during their "May Melee" Regionals, the pun-filled "MM-Mei" Legendary Skin for Mei was released.

The "June Joust" was the second among the four tournaments that the League will be doing for this year's season. The "May Melee" saw the Dallas Fuel won after a 4-2 victory against the Shanghai Dragons in the Finals.

This June, according to DBLTap.com, the top 4 teams, including the "May Melee" runner-up Dragons, along with New York Excelsior, both representing the East region, the "May Melee" winners Fuel and Atlanta Reign, both from West region, will square off in a double elimination-style match bracket.

Teams that will be lost twice duing the said tournament will be eliminated, and the top team from both the Winner's Bracket and the Loser's Bracket will face off in a 6-match Finals.

How to get your "Ange de la Mort" Skin

According to Dexerto.com, the "Ange de la Mort" skin can be obtainable with the help of Overwatch League Tokens, a currency that can be used in buying other Overwatch League-themed items, including character skins.

Once you are done linking, you may now enjoy watching your Overwatch League "June Joust" tournament while racking up those tokens.

Collect 200 Overwatch League Tokens before you buy the "Ange de la Mort" skin for Widowmaker, which will be sold in limited time from June 9th until June 21st.

For the other schedules for the "June Joust" tournament, you may visit the Overwatch League website, overwatchleague.com.