'Safari' Extensions on iOS15 Guide: How to Install, Manage the Extension in your iPhone, iPad 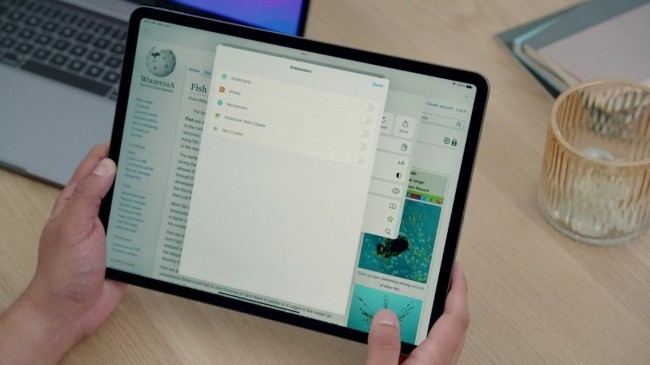 In a screen shot from one of the videos used in the Worldwide Developers Convention 2021, it shows that Safari Web Browser Extensions can now be used on an iPad, or an iPhone.
(Photo: Screenshot from Apple Developer's Website)

During the last Worldwide Developers Conference (WWDC) 2021, Apple has announced that they will bring the Safari Web Browser Extensions to its iPhones and iPads along with its new OS, the iOS15 and iPAD15 respectfully.

This is right after the company announced that their video conference app, FaceTime, will be available in Android phones and Windows-run computers.

The Safari Web Browser Extensions will provide the same services like its Google Chrome counterpart like ad blockers, VPNs, password managers, and among other internet services.

Working for a Uniform Extension

According to CNet.com, the said announcement proved that Apple's Safari comes first in providing web browser extensions for its iPhone and iPad earlier than Google's Chrome.

Despite of that, however, both companies have decided to improve universal browser extensions for several web browsers.

According to 9to5Mac.com, Apple and Google, alongside Microsoft and Mozilla, discussed during the last World Wide Web Consortium how they will develop web extensions easier by reducing the differences between their respective web browsers.

In a different article, CNet.com said that the companies involved are hoping that it would make easier for several developers to write or create extensions because of a shared standard that would help bridge said difference.

Other Features for Safari

Aside from the integration of the browser extensions, several changes were made to the Safari Web Browser which was revealed during the WWDC 2021.

According to Macrumors.com, the web browser's Start Page was redesigned, making it customizable with the help of the Edit Button. Users may also add a custom wallpaper of their own or use a pre-existent one.

Users may also create a new empty tab group or a new one with existing opened tabs, while they can switch in between these tabs. The card-style viewing of multiple tabs was eliminated as well, and instead arranged as thumbnail previews in a vertically scrolling grid.

The new Safari web browser will also have a refined floating tab bar that they can minimize. Its functions in the Tab Switcher view are also transformed for organizing tabs more efficiently.

They can long press any open tab in the Tab Switcher to access other options including Close Other Tabs.

How to Install Safari Browser Extensions

With the updates regarding the Safari Web Browser, including its extensions, as well as the new iOS15 and iPadOS15, its users are eager to experience this within their iPhones and iPads.

In order to use the Safari Browser Extensions, users must tinker the settings within the said web browser. In a guide from Beebom.com, users need to go to "Settings," then go to the tab that says "Safari."

Next, they need to go to the "Extensions" tab and tap "More Extensions." Once they have done that step, they can explore the Safari Web Browser Extensions that they can use.

They can also go straight away to the Apple App Store on their iPhone, then search for "Safari Extensions" or "Web Extensions."

Once they have installed the extensions needed, they may open the web browser and tap the toolbar button. From there, find the installed web extension and select it. If prompted, they can allow it to access certain permissions.