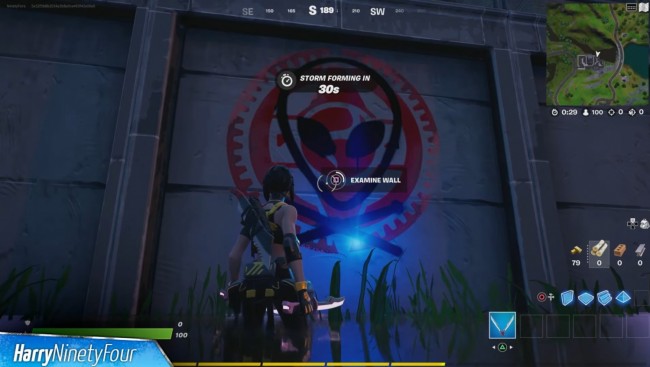 Players may look for a graffiti-covered wall, like this one in the screenshot, in one of the Epic Quests for Fortnite's Chapter 2: Season 7 Week 2.
(Photo: Screenshot from HarryNinetyFour's "Search for a Graffiti Covered Wall at Hydro 16 or Near Catty Corner Location - Fortnite")

The Second Week of Fortnite's Chapter 2: Season 7 is now on-going and player are now set to accomplish brand new missions within the game before a new set of missions will hit the game this coming June 17.

This week's Epic Quests will a search for graffiti-covered walls within the map, as well as looking for sprays while destroying several equipment at satellite stations.

The Search for the Graffiti-covered Wall

For this quest, you need to go to either one of these two locations - Hydro 16 or Catty Corner. According to a guide provided by Attack of the Fanboy, you must first look for Hydro 16, a landmark located at the east of Slurpy Swamp.

Once you are in the landmark, you may jump into the shallow water on the northeast side of the building. From there, you will see an alien graffiti tag near the corner of the building's foundation. Once you saw it, you can go to the dam where you will also see another graffiti-covered wall.

You may also go to the Catty Corner where the two other graffiti-covered walls are located. The walls were located to the east, near the sealed-off vault. You can follow the road down to the vault's doors and you will see the locations of both walls.

The first one was located on a wall to the left of the road, while the second one is to the right of the main vault door.

According to RealSport101.com, the graffiti-covered walls in Hydro 16 is easier to find, and you can easily head towards it as the place is not a much popular landing spot in the map. Another advantage is that you can also find a weapon upgrade bench there that you can use.

Another Epic Quest for the week 2 of Fortnite's Chapter 2: Season 7 is for you to collect the spray cans that was scattered across specific places within the map

According to Forbes, you have two places to go to in search of those spray cans - in Pleasure Park or in Dirty Docks.

In the guide provided by GamesRadar.com, in order to look for the four sprays can in the Dirty Docks, you must go first to the warehouse within the area. From there, go to the middle until you see orange metal shelves that are piled above the checkered floor tiles. Underneath those metal shelves, you will see the first spray can.

Next, go to the large open entrance. The second spray can is near there, next to a long box on its end and several orange metal shelves.

The third spray can is located near the small back door, underneath the single section of yellow metal shelves by a small wooden box.

After that, proceed to the ground floor under the stairs to look for the last spray can in the area. The said quest item is in between two wooden crates.

Another location that you need to go in search of the spray cans is the Pleasant Park. In order to start your collection in this location, first go to the main house, where you can see the first spray can next to the blue metal shelves that are opposite to the said door's house.

Next, go to the garage that is next to a red tool trolley. The second spray can is located in the garage's rear.