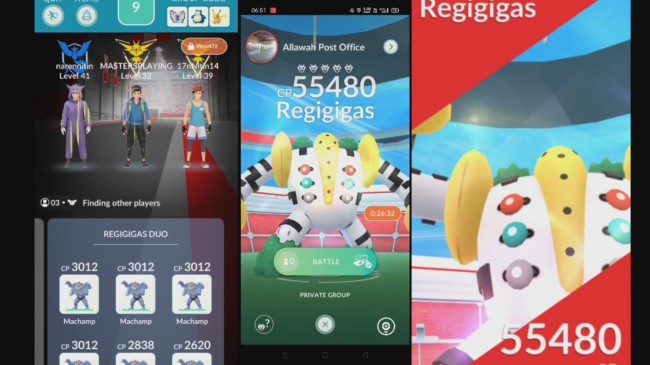 The Solstice is coming in the world of Pokemon GO, and as the Summer and the Winter season begins in several parts of the world, so as the season of the Normal-type Legendary Titans leader Regigigas.

The Colossal Pokemon, and its Shiny version, will be the only Pokemon in the Five-Star Raids during the Solstice Event. Aside from that, Lunatone and Solrock will also be appearing both as Global Wild Spawns and as a part of the Three-Star Raids.

How Does the Solstice Event works

The Pokemon GO Solstice Event will feature unique spawn areas in lieu for the event's theme. In the event proper, Pokemon will spawn in either the Northern or the Southern Hemisphere, depending to where the players are.

To celebrate the days growing longer in one hemisphere and the nights following suit in the other, Pokémon GO’s solstice-themed event is returning! ☀️🌙 https://t.co/gX3DtvnYtT pic.twitter.com/wREx3PaKi5

According to the FutureGameReleases.com, players can take and complete Field Research tasks, which will be revealed in a later time during the event, in order to have an encounter with the Shiny counterparts of Yanma, Chimchar, Snorunt, and Snover.

Aside from the encounters, players will also be rewarded with Silver Pinap Berries and Regirock, Registeel, Regice, and Regigigas Candies once they finish the tasks in the event-themed Field Research.

How to Defeat Regigigas

As mentioned, Regigigas is the only Pokemon in the Five-Star Raids for the Solstice Event. These raids, including its Pokemon spawns, will be different depending on what hemisphere you are in, according to Attack of the Fanboy.

However, several Pokemon will be spawning for the Raids no matter what hemisphere you are in. Regigigas was one of them.

In order to defeat the Colossal Pokemon, you need to understand its weaknesses as well as how to counter them.

With these in mind, you need to prepare a Fighting-type-dominant Pokemon line-up. Pokemon GO Hub has suggested Pokemon that can counter Regigigas - Machamp and Hariyama can be a good addition to your lineup with their Counter and Dynamic Punch attacks.

Fire/Fighting-type Pokemon like ­Blaziken, Emboar, and Infernape can also be a good option as well as other Pokemon such as Heracross, Lucario, Toxicroak, Breloom, Poliwrath, and Gallade.

Another good additions to your Pokemon team are Metagross, a Steel-type Pokemon to exploit Regigigas' weakness, Mewtwo and Darkrai for its Focus Blast attack, and Dialga.

According to Eurogamer.net, you must first attack the Regigigas with your powerful Fighting-type Pokemon before moving on with the Psychic-type like Mewtwo, if you need to.

Also, be on a look like for the weather during the raids as it can influence either your Pokemon or Regigigas. The best time to face the Colossal Pokemon is during Cloudy Weather as it can boost Fighting-type moves.

READ ALSO: 'Pokemon GO' 'A Very Slow Discovery' Quest Guide: How to Catch Your Own Galarian Slowpoke and its Evolutions