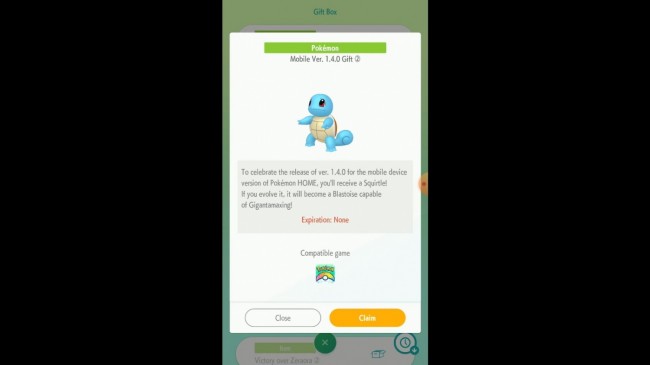 Gigantamax Factor Squirtle, one of the two Mystery Gifts that you can have after Pokemon Home's Version 1.4.0 Update.
(Photo: Screenshot from HennyCheesy's "Pokémon Home How to Claim Your capable of Gigantamaxing Bulbasaur & Squirtle Mystery Gifts! (Update)")

Pokemon Home just recently had their version 1.4.0 update, and to celebrate the said update, they will give its players Mystery Gifts that they can even use in an another Pokemon game.

Players will now receive a Gigantamax Factor duo of Bulbasaur and Squirtle, which they can be used to Pokemon Sword & Shield as well. Along with the two free Pokemon, version 1.4.0 update also gives the players of Pokemon Home several changes to the game's features as well as slight improvements.

For those who are unfamiliar, Pokemon Home is a storage app where users can store all of their Pokemon from various games in one place and moving them to a compatible Pokemon game, such as the aforementioned Sword and Shield and the Let's Go series.

Commemorating the new June Pokemon Home Update with a special Bulbasaur and Squirtle that you'll be able to receive as Mystery Gifts in both the mobile version of Pokémon HOME and in your Pokémon Sword or Pokémon Shield game.
They have the have capabilities of Gigantamaxing! pic.twitter.com/BHzBE50aFg

First released in the latter's The Isle of Armor expansion pack, both Pokemon was a reward after players completed the first of the three trials of the Master Dojo - by chasing down the Slowpokes using a customized bike.

Once you have the two, after they evolved into Venusaur and Blastoise respectively, players can give them the "Max Soup" item in order to unlock their Gigantamax form, a gargantuan version of themselves with larger HP and a move called the G-Max Move that can be used in battle.

You can do this, however, once you import them to Pokemon Sword and Shield from your Pokemon Home account.

Also, in the patch notes for the update that was obtained by Nintendo Wire, if they received the Charizard from Leon after becoming a Chapion in Pokemon Sword and Shield, you might complete the Gigantamax versions of the Generation I's Starter Pokemon.

How to Receive these Mystery Gifts

According to Comicbook.com, you can get these Mystery Gifts after updating your Pokemon Home app to its latest version 1.4.0. Once it is completed, you help assistant, Poke Boy, will tell you that there is a present waiting for you.

You may now get these Mystery gifts, which will be deposited directly into the Boxes within the app. You may claim these Mystery Gifts until June 30th, at 11:59 PM UTC.

Aside from the Mystery Gifts, users of Pokemon Home will also receive improvements from several of the app's features as well as a new one.

According to Nintendo Wire, Pokemon Home's Pokedex features have been expanded, allowing its users to view a Pokemon's appearances from different angles. However, this feature will not apply to certain Pokemon forms.

Other improvements include the announcement display, additional icons for user profiles, as well as other issues that were addressed in order to ensure a user-friendly experience.

On the other hand, a new feature was added in Pokemon Home. The Catch Calendar, the said new addition, will allow its users to view their Pokemon in order of when they were captured.

Pokemon Home is available for both Nintendo Switch and mobile devices.