'Destiny 2' Season of the Splicer Week 6 Challenges Guide: How to Clear Them ALL Fast! 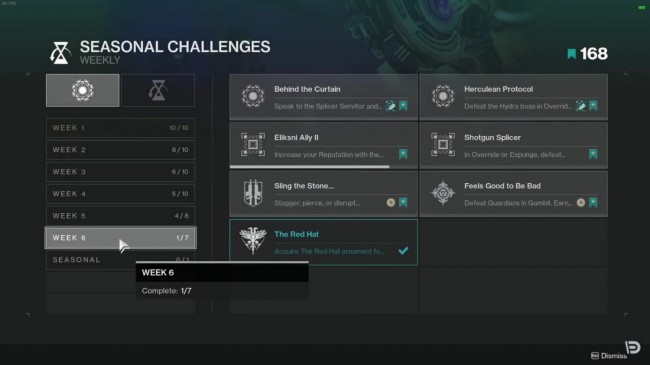 Destiny 2 has released the Seasonal Challenges for the Week 6 of its "Season of the Splicer" and players will need to get more involved than the usual to clear the challenges.

According to TVOverMind.com, these Seasonal Challenges will the Destiny 2 players the opportunity to grind because these challenges gave huge XP points as well as to snag rewards and loot along the way.

Players may also found out that most of the Guardians in several sub-challenges are not too difficult to slay them, but there are others who need to take some time before defeating said Guardians.

As an endless night falls an unlikely ally holds the key.

Season of the Splicer boots up on May 11.

Challenge 1: Behind the Curtain

In order to finish the said quest line, you must do the following according to Eurogamer.net - First, interact with the Splicer Servitor in the H.E.L.M., then craft a Key code using Ether with the Splicer Gauntlet. After that, you must play an Override activity and open a Conflux Chest with the Key Code.

Next, complete the Corrupted Labyrinth Expunge Mission on the Tangled Shore. Once you accomplish the said Expunge Mission, you need to head to the Eliskni Wing of the H.E.L.M. and speak to Mithrax.

Then, go towards the Tower and speak to Ikora Rey. Lastly, to the Eliskni Wing of the H.E.L.M. and speak to Mithrax again.

Once you accomplish the said questline, you may defeat any Champion within the system, and you are done with the challenge. You will also get a bonus for any Champion that is defeated in either an Override or an Expunge Mission.

In this challenge, according to Times News Express, you need to defeat the Hydra boss in an Override, an activity that needs six players to venture into a Vex network. After that, you can defeat a Vex that is spawned anywhere in the system. You will also get a bonus if you defeat a Vex in an Override activity

To complete this challenge, you must increase your reputation with the Splicer Servitor in the H.E.L.M. a total of 20 times by gathering a lot of Decrypted Data. According to TVOverMind.com, you can easily accomplish this challenge if you have been playing quite a bit.

Also, according to Times News Express, the more Decrypted Data you had earned, the more the player's rank increases.

In this challenge, according to Polygon, you just need to exterminate combatants in either an Override or an Expunge mission using only a shotgun. You can do this challenge while doing other challenges since it involves either of the two missions. You may also get a bonus if you accomplish this in a rapid pace.

According to Polygon, you need to stagger 50 Champions in order to accomplish this challenge. Much like the previous challenge, you can do this challenge with the other challenges that you have.

A tip from Polygon is that if you are doing Nightfall missions within this season, you can complete this quest quickly.

The quest needs to obtain The Red Hat ornament for the Null Composure. According to Times News Express, you need to enter the Crucible and defeat a number of enemies with Fusion Rifles while earning three valor ranks.

Challenge 7: Feels Good to be Bad

In this final challenge, you need defeat the Guardians in Gambit. According to TVOverMind.com, you need to defeat forty of them. Bonuses will be awarded for players who can defeat said Guardians as an invader, so you need to play aggressively.

A tip here is you need to equip weapons with quick time-to-kill and use Supers to accomplish this as soon as possible.