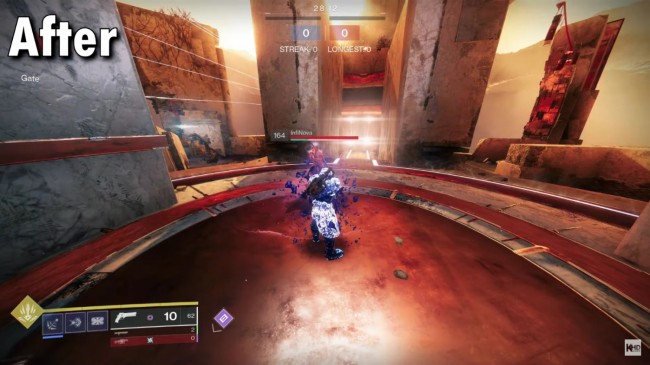 This screenshot shows the reduced duration of the "Freeze" skill of Destiny 2's "Stasis" subclass.
(Photo: Screenshot from KackisHD's "New STASIS NERF! - Before & After Gameplay! | Is Destiny 2 PvP SAVED?")

Destiny 2 released a new patch update that will tone down the abilities of their Stasis subclass, along with several hotfixes within the game.

BUNGiE, the developers of Destiny 2, released the said update after its scheduled server maintenance today, June 6th. Along the update are several hotfixes to several in-game issues, particularly in its gameplay.

According to its patch notes, which was released in the game's website, the abilities of the Stasis subclass were nerfed down, or reduced down, so that it will not be a threat to several players in their PvP game mode, the Crucible.

Stay tuned for updates on the status of server maintenance.

This includes the reduced duration of its Freeze, particularly all non-Super freezes against players, to 1.35 seconds, however according to the patch note, players may possibly break out only when they froze by a Super.

Freeze will also have a reduced bonus damage inflicted by special weapons, heavy weapons, and Light-based abilities against frozen players from +50% to +5%.

Another change that will implemented is its Slow can no longer reduce weapon accuracy as well as it no longer suppresses any class abilities and air moves. The change also reduced the movement speed penalty while being slowed by 20%.

Both Whisper of Hedrons and Whispers of Rime fragments will also receive a nerf from the patch update. The former will no longer increase weapon damage, but instead increases weapon stability and aim assist, as well as Mobility, Resilience, and Recovery after freezing.

Finally, the Coldsnap Grenade will no longer track targets after its first target acquisition as well as prolonging the arming duration before seeker spawns from .3 seconds to .8 seconds.

The update also reduced its detonation radius against players from 3 meters to 1.5 meters, but it can bounce off walls and detonate once it hit the ground.

Aside from the General Changes, Patch 3.0.2.3 also nerfed down the abilities of Stasis' own subclass. According to Forbes, the Behemoth, the Stasis subclass for Titans, will have its Shiver Strike a reduced flight speed and distance, as well as lesser knockback and will not have a slow against players.

Its Cryoclasm will force its caster to sprint for 1.25 seconds before using it, but it will not have a cooldown. Its Howl of the Storm will have a smaller angle of freezing and damage, and its crystals will have lower freezing capabilities. They will also form slower so that players can escape.

Lastly, for the Behemoths, their Glacial Quake will have a reduced freeze range on heavy slam versus players while damage resistance was lowered from 50% to 47%.

Revenants, Hunter's Stasis subclass, will also have its skills reduced. According to GameSpot.com, its Withering Blade can only freeze players for 1.5 seconds, while its Winter's Shroud can slow players down also for 1.5 seconds.

It's Touch of Winter will no longer have an increased movement speed or travel distance for its Coldsnap Seeker, but it can spawn a small Stasis crystal on detonation.

For Warlock's Stasis counterparts, Shadebinder, Forbes stated that their Penumbral Blast will have a reduced tracking and proximity detonation size against players, while its freeze radius is also reduced from 2.7 meters to 1.5 meters when it hits a wall.

Its Iceflare Bolts can only chain once after a player shatter, and its Winter's Wrath will have less tracking after its caster has been flying for two seconds.

According to BUNGiE, these changes will might create a positive impact towards its player's PvP experience in the Crucible. They also said that they will monitor the gameplay data as well as community feedback regarding these changes.

For more information regarding the Patch 3.0.2.3 Update, you may visit its patch notes in their website.