Destiny 2 Corrupted Key Codes: How to Farm? Should You Use Them? 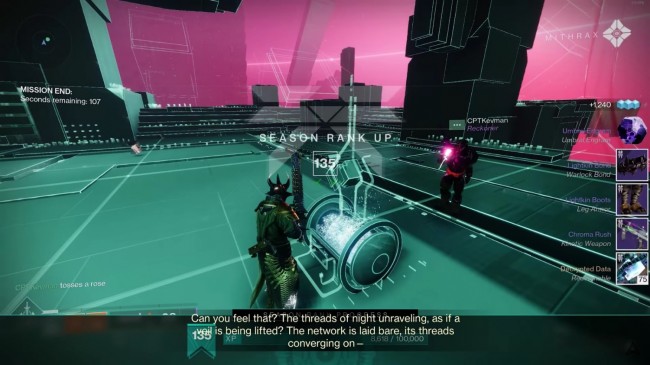 (Photo: Screenshot from Aztecross' "Corrupted Key Codes (How to Get Them & Why) | Destiny 2 Season of the Splicer")

One of these collectible items within the game is the Corrupted Key Codes. These are not just collectible items, but as an essential item that Bungie, the game's developers, added in order for you to obtain loot.

How to Get the Corrupted Key Codes

According to RealSport101.com, these codes are used to unlock the Corrupted Conflux Chests that was dropped by a boss in any mission after defeating it. Without them, players will not able to earn both the loot and the Decrypted Data that is in the chests.

Destiny 2 Weekly reset guides, starting with how to get the new Corrupted Key Codes for the new variant of Expunge. https://t.co/hNj2wZxLVL

However, according to a guide by Dual Shockers, these are random drops that you won't get until you finish the Path of the Splicer VI quest and activate the Corrupted Access for the Splicer Gauntlet. Unfortunately, these key codes have a very low drop rate and you do nothing to increase it.

READ ALSO: 'Destiny 2' Season of the Splicer Week 6 Challenges Guide: How to Clear Them ALL Fast!

However, you can increase the value of the Corrupted chest items with the help of the Vulnerability Exploit 1-2-3 upgrade for the Splicer Gauntlet. This step is an optional, but it will give worthy and usable items after grinding for those key codes.

Another tip regarding these key codes, according to Gosunoob.com, is to wait out wait out the Boss Battles at the end of a mission, whether if it is an Expunge Missions, Nightfall Missions, Strikes, or Override Missions.

Every Boss Battle will continue to respawn enemies and have a relatively high chance of dropping Corrupted Key Codes when they die.

Keep in mind that you can hold up to five Corrupted Key Codes in your inventory at the same time.

Should You Use These Corrupted Key Codes

Despite of its very low drop rate, the Corrupted Key Codes are an essential for a Destiny 2 player not just for the loot that they will receive once they open a Corrupted Conflux Chests, but also for the sake of the game's lore.

If you can dive deep towards its lore, you will see that every Corrupted Key Code has its story behind it. One Redditor sees a quote regarding Destiny 2's lore inside an obtained key code.

The lore reads the following, "This key code is still valid, the data corruption does not appear to compromise its authenticity. Instead it...appears to include a transfer to broadcast a signal when it is used. But I can't say to where, or whom."

Several Destiny 2 players discussed the meaning behind the message. Some say that the key codes are connected to both Quria and Savathun and how they are "using" the players through the key codes.