Ubisoft's 'Rainbow Six Siege' Free Weekend Guide: How do you Play this Game on PS4 for Free for a Limited Time 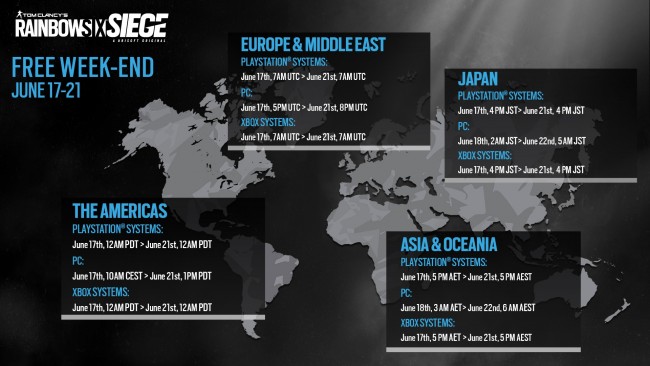 Ubisoft will open the doors of Rainbow Six Siege for its players, including the new ones, as the first person shooting (FPS) game will be up for grabs for a limited time. Rainbow Six Siege, a game that needs to be bought first before playing it since its release in 2015, will be free to play for just this weekend.

A Limited Full Experience for Free

One of the reasons why Ubisoft released their famous FPS game is because of its player base, including those who are curious to the game itself.

Interested in the Rainbow Six Siege free weekend but don't know how to get started? This FAQ has information on accessing the free weekend, minimum requirements, and more! 👉 https://t.co/danEw8gdxU pic.twitter.com/oLu86DJDGa

According to HITC.com, the limited free release of the game will allow newcomers to experience the game to its fullest, including its sixty Operators in its roster and an access to their game maps and modes, including its online multiplayer modes.

Also, according to the FAQs that was posted in the game's website, they can also play Rainbow Six Siege during its limited free release with everyone who either already owns the game or is enjoying the said limited release, including their friends.

This is despite of the fact that there are still problems within the game. FossBytes.com stated that Ubisoft is still solving the issue regarding players who had a hard time targeting their enemies, as well as testing a rim lighting effect to prevent several Operators' skins from blending in the background.

However, once the limited free release is gone, Rainbow Six Siege will return as a pay-to-play game. But Ubisoft said that the game will be sold on a discounted price up to 70% for a limited time only.

The game's developers also noted that the player's progress will be saved and will carry over once they bought the full game.

The limited free time release of Rainbow Six Siege, is also a preparation for the upcoming release of a new Rainbow Six game, Rainbow Six Extraction, which was first unveiled in the Electronic Entertainment Expo 2021 during their Ubisoft Forward showcase event.

Extraction will be a different take from the usual Siege as it will focus on zombie-like creatures that are controlled by a parasite. In Extraction, players will focus on Operator abilities that will counter these enemies while extracting their fallen teammate from a parasite-infected site.

How to Get You Rainbow Six Siege for Free on PS4

According to the event's FAQs, in order to get your free Rainbow Six Siege for a limited time, you must either click on the link in the event's website or go to your Uplay Launcher if you are playing the gaming using your PC.

If you are playing using a PlayStation 4, you must first find the game on the PSN Store, then click on the "Try free Demo" button that is located next to the "Add to Cart" button.

If you are using a PlayStation 5, you can also find the game on the PSN Store, then click the three dots button next to the "Add to Cart" button. Then, select "PS4 |Full | Tom Clancy's Rainbow Six Siege" to access the Playstation 4's counterpart of the PSN Store. You can download the game there.

If you are playing the game using either thew Xbox One or the Sbox Series X|S, you can check the Games with Gold section where you can find the game itself.

Take note that you must pre-load it first (this applies only to both PC and PlayStation System players, while for Xbox players, there will be no pre-load).