Top 5 List of Ores in Minecraft's 'Caves and Cliffs – Part 1:' Locations to Mine + How to Get Them Easily 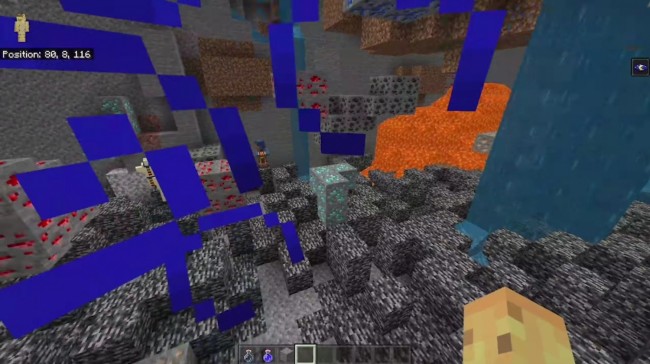 In Minecraft's "Caves and Cliffs - Part 1" update, players can mine for diamonds in an underground cave.
(Photo: Screenshot from ibxtocat's "Minecraft 1.17: How To Find Diamonds, Copper & Deepslate")

Minecraft's Version 1.17 "Caves and Cliffs - Part 1" update gives players new minerals to mine for their items in the game. Not only that, the said update will give them the hard time to locate and dig said minerals.

According to DualShockers, minerals that are included in Caves and Cliffs included Raw Gold and Amethyst Geodes, along with Raw Copper and Raw Iron. The aforementioned two minerals were among those five ores who are hard to find according to Sportskeeda, alongside Lapiz Lazuli, Redstone, and Emerald.

The same article also said that spawn levels, as well as other factors, will might change the appearance and locations of every ore, as well as the incoming "Caves and Cliffs - Part 2" update. Because of this, players are preparing to dig deeper in order to retrieve said ores.

Ever since being added in the in 2012, Lapiz Lazuli is the go-to mineral for enchanting items as well as dying items into blue. According to Sportskeeda, once being mined, the Lapiz Lazuli ores will drop between four to nine pieces of said mineral.

READ ALSO: 'Minecraft' 1.17 Update: What Features Will 'Caves and Cliffs: Part 1' Give to its Players, When is its Release Date

There are places and methods within the game that players can mine Lapiz Lazuli. One of which are the caves that they can mine ores to. To find said caves, players can explore above ground until they find a cave entrance. Another way to mine these ores is to dig downward into the ground.

From there, they should be checking their Y level as they search to ensure they are within range.

They can also obtain these ores through loot chests that they can find throughout the map. According to ReportDoor.com, these chests have a chance to have a lapis lazuli ores in them, although this is not always guaranteed.

In order to look for these chests, players should look in these three locations -- desert temples, which is located in desert biomes; mineshafts, which can be found underground in any biome, in a shipwreck, which you will be looking for a treasure map within it.

The Redstone ores did not experience any changes during the Caves and Cliffs update. The said ore is still an uncommon one to find aside from diamonds. Once mined, Redstone can be used in possible creative ways as well as a light source than can be used for mining underground.

According to a separate guide from Sportskeeda, players can mine Redstone from these two ores, a regular ore and a deepslate ore. These ore can be generated in the Overworld in 'blobs,' which can generate 8 times per chunk in blobs that are sized 0 to 10. These blobs will spawn in altitudes 1 to 16 in all biomes.

Another uncommon mineral in the game, Gold ores can be changed into a rare one once Caves and Cliffs Part Two update hits. A valuable mineral, Gold can be used in upgrading armor, weapons, and tools, as well as in creating Golden Apples, and crafting powered rails for railroads.

According to Sportskeeda, the best way to find gold in the game is to mine for it. Players can either explore a vast cave between Y levels -64-34 in any biome or do strip mining in order to find and collect said ore. Strip mining can look at the diamond level, in Y Level 11-12 and in Y level 32-79.

Raw Gold can only be mined with Iron grade or better pickaxes. Once acquired, they can be made into blocks which can made to save inventory space, while its raw ore can be smelted and used when necessary.

Another best place to mine for gold is in the Mesa Biome, where it has a huge increase in drop rate.

Used as the currency for trading items with villagers, Emerald ores can only be found in the mountains biome. However, mining it is not an efficient way as it only generates small veins. According to Sportskeeda, these ores can be mined using an iron pickaxe or better.

Emerals can also be found in chests of several structures within a village, shipwreck, buried treasures, underwater ruins, or desert temples, as well as in mobs such as Vindicators and Evokers, which are spawning in the Woodland Mansions.

A second-most durable material in Minecraft, Diamonds are flexible materials that can be crafted to items in the game such as enchanting tables, swords, pickaxes, armor, and among others.

According to Sportskeeda, diamonds can be found inside spaceships and in Nether chests, or more commonly, in caves, on Level 15 and below, and in ravines. Players can find them in veins of anywhere from 1-12.

They can use an iron pickaxe and above to mine them. Take note that players should wear armor when looking them inside caves and ravines.