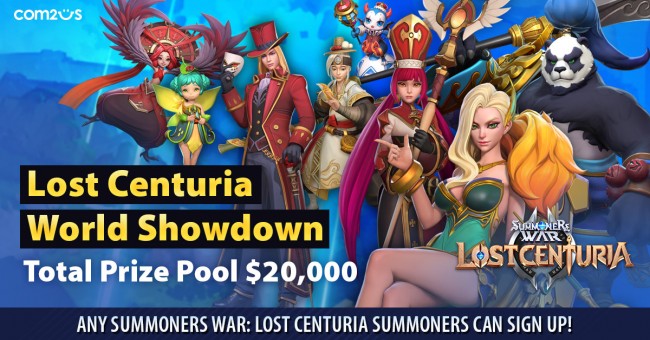 Com2uS, the global leader in mobile game development and publishing, has announced a pair of Esports events for the hit fantasy mobile RPG franchise "Summoners War."

The creators of "Summoners War" have officially opened the applications for "Summoners War World Arena Championship 2021" and the "Lost Centuria World Showdown." These events welcome Summoners around the world to compete with the best of the best and win top cash prizes along the road.

An Invitation for Summoners Worldwide

According to Com2uS, the events coincide with the seventh year anniversary of the hit mobile game, with its latest installment "Summoners War: Sky Arena" having more than 100 million active players worldwide. The mobile game even has its own dedicated Esports community, with high-stakes events occurring internationally in Seoul, South Korea and in Paris, France, in addition to its online events over the years.

"We are thrilled to invite Summoners from around the world to compete on a global scale in these two totally unique games," said Kyu Lee, GAMEVIL COM2US USA President. "At Com2uS, we're dedicated to expanding opportunities for 'Summoners War' players within esports, and we're beyond excited to bring 'Lost Centuria' into the fold."

For the safety of all participants, the Summoners War World Arena Championship 2021 (SWC2021) will be held entirely online without anyone traveling and with no live audience. To provide a level gaming field, a best of five (Bo5)" format will be used for all regional cup qualifiers, as well as the Regional Cups and World Finals. A "best of three (bo3)" format will be used for all other matches. A total prize pool of $210,000 awaits players

As the top participants will be coming together for the World Arena Championship 2021, the game will be taking into consideration the recent seasons 16 and 17, checking the player scores for each season, not the combined performances for both. Therefore, summoners who wish to play in SWC2021 bud didn't play in the Season 16 World Arena will still have to play in the ongoing Season 17 World Arena. Also, Com2uS announced that there would be no seed advantages for participants of the last SWC2020.

Applications have opened last June 16 and will last until June 28, with the preliminaries taking place from July 23 to August 21. More information is available on the Official SWC Webpage.

On the other hand, the first-ever Lost Centuria World Showdown is expected to kickstart a new global e-sports event players around the world could participate in. With a $20,000 prize pool, it will be open to any player that is Gold 5 or higher. The Top 8 players will be the game's finalists of the World Showdown from June 24 to July 1. Additional details are available on the Official Lost Centuria Webpage.

'PUBG New State' Guide: Release Date, How to Pre-register, Where to Download, ...