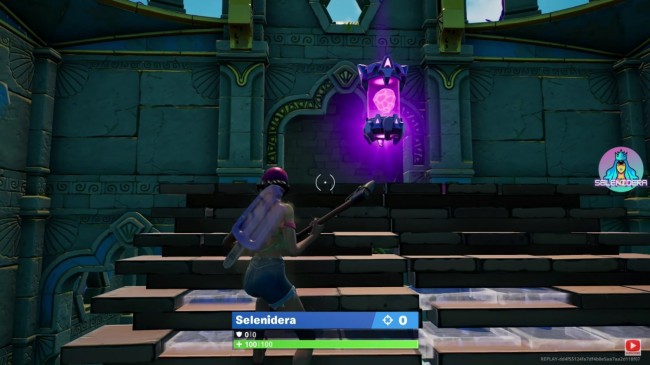 In this screenshot, a player locates one of the Alien Artifacts inside a building at Coral Castle.
(Photo: Screenshot fro Selenidera's "*ALL* ALIEN ARTIFACTS (WEEK 3) | ALL LOCATIONS | Fortnite Chapter 2 Season 7")

A new week is approaching in Fortnite and so as new collect-a-thon challenges within the first person shooting (FPS) game. The continuing Chapter 2: Season 7 still continues to give quests to collect the artifacts for modifying the appearance of the Kymera player skin.

This is right after the game's biggest update, the Patch 17.10 Update, has been installed.

According to Attack of the Fanboy, each of the hidden canisters that was scattered throughout the game's map, once collected, will add four more Alien Artifacts to your inventory.

This means that for this week, you can collect up to 16 Alien Artifacts that you can use to buy customization parts for your Kymera skin, which is included in the Chapter 2: Season 7 Battle Pass as its Tier 1 reward.

Where to Find the Alien Artifacts, How to Get them

This week's Alien Artifact locations, like the others before, are scattered throughout Fortnite's different locations.

According to Sportskeeda, the first location for these artifacts is at the Believer Beach. Once you are in the location, you can see a house. From there, you need to build a ramp to go to its roof, and when you are there, you will see the artifact.

The second artifact location is in a large central building at the Coral Castle. The artifact is on the top floor, above a short pillar in front of the doorway.

The third one can be found inside of a house just below the lighthouse in the northwest corner of the map. You just need to open its door to find it so that it will be visible.

The fourth Alien Artifact is in an another house in the middle of the Slurpy Swamp. Approach the arch that is located in the house's garage, and from there, you can see the artifact.

The last location for the Alien Artifacts is on one of the small islands outside of the Misty Meadows. Once you are there, go to the overpass, then go underneath it. From there, you could see the last Alien Artifact for the week.

According to PCGamesN.com, there will be more locations in the map that will be added in the coming weeks, as more alien artifacts will be also added for you to collect and use to unlock more options for your Kymera skin, which includes cosmetic ones for its face.

Aside from the collecting Alien Artifacts, players of Fortnite will also have a great time collecting other quest items during the Cosmic Summer event, a two-week-long event in the FPS that was launched during the patch update.

According to Attack of the Fandom, there are seventeen challenges in total that will be released in waves throughout its duration. Once you accomplish these quests, you can grab Event-only goods ranging from back blings to gliders to emotes.

The first set of cosmic Summer event challenges is already available once you finished playing the Bios Zone Wars Trio, while its remainder are centered around different limited-time game modes.