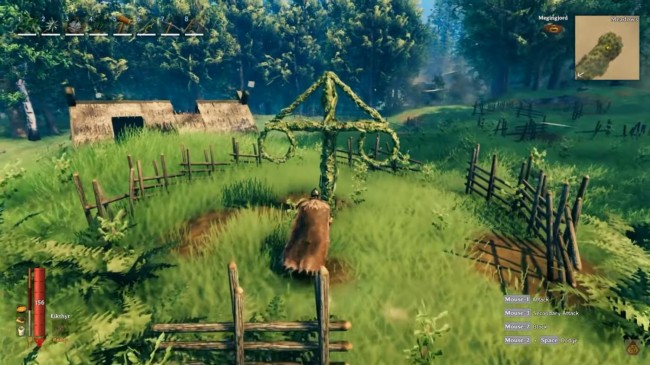 At first, players in Valheim are searching for Maypoles, like this one in the Screenshot. However, in the new Patch 0.155.7 Update, players can now create their own.
(Photo: Screenshot from The Ginger Empire's "Valheim What is Maypole + How to Find")

Valheim released their newest Patch 0.155.7 Update, and it gave a mixed bag for its players to experience.

The Survival Sandbox game's recent patch will make them build their own Maypoles, which could help them in their quests within the game, while it gave changes to monster AI that will transform those spawnable creatures into imminent threats to them and their structures.

Other parts of the patch notes also involve in several bug fixes, including one that majorly affected the game as a whole.

Just in time for midsummer, players can now build a #Valheim Maypole of their own! 🌼 pic.twitter.com/3ZgcODkrtB

Before this patch, a "world-destroying bug" is affecting the game, according to Gamespot. Last February 13th, Richard Svensson, the chief executive officer of Iron Gate Studios, the developer of the game, said in a tweet that the bug was roaming free in the system.

READ ALSO: Epic Games' 'Frostpunk' Giveaway: How to Get this City-Builder for Free

He said that the bug occurred when players are exiting the game by using the Alt+F4 keyboard shortcut, which triggered the erasure of a player's progress in the game. He then advised the players that time that they need to back-up their progress, including their characters and their built world.

In the game's new 0.155.7 update, the said bug was addressed, saying that the unusual case of world corruption after shutting down has been resolved. Players are still advised to preserve their game data through roundabout methods.

Another bug fix in Valheim included one that fixes an issue where a player clicks a container multiple times to open it during the Multiplayer mode.

Another changes implemented in Valheim during its patch update is giving its monster AI a buff that make them a threat towards its players.

According to Comicbook, the patch update will try to make the monsters in the game "more slightly aggressive," which was even proved by its patch notes, saying that those monsters will aggressively attack any built structures when they unable to attack the player.

Another monster AI tweak coming from the same patch update, according to Rock Paper Shotgun, is the game's bosses will not attempt to run away from you in a fight. This means that you will be slaying any of those bosses that will not surrender.

Other tweaks including Greydwarfs throwing projectiles better, Event trigger tweaks such as Wolf events will trigger after Bonemass has been killed or a Moder army can appear in mountains, and a long forgotten Blob event was enabled.

How to Make You Very Own Maypole

Valheim's Patch 0.155.7 Update will give its players an opportunity to craft their own Maypole. First appeared in a game within abandoned buildings in the Meadows biome, Maypoles, according to PCGamer.com, provide additional comfort to a player when resting within its range.

Comfort impacts the "rested effect," which will increase any XP gains as well as the player's health and stamina regeneration rates. The more comfortable a player is, the longer it will benefit from the said boost.

The game did not release any recipes for the Maypole, but according to Dual Shockers, players created a recipe for the item even before the patch update. The said recipe was created by using the game's Debug mode, which it was found in the list of craftable items in the upgraded workbench.

The recipe for crafting a Maypole requires you to bring 10x Wood, 4x Dandelion, and 4x Thistle. Take note that this recipe was created before the patch update, and it will change once the game is updated to the latest patch version. But while you are waiting for the said recipe, you can create a Maypole using this recipe.

Valheim is available for Windows and Linux PCs via Steam.

TAG Valheim
© 2020 Game & Guide All rights reserved. Do not reproduce without permission.