'Guilty Gear Strive' May Combos Beginner's Guide: How to Play this Dolphin-Riding Pirate 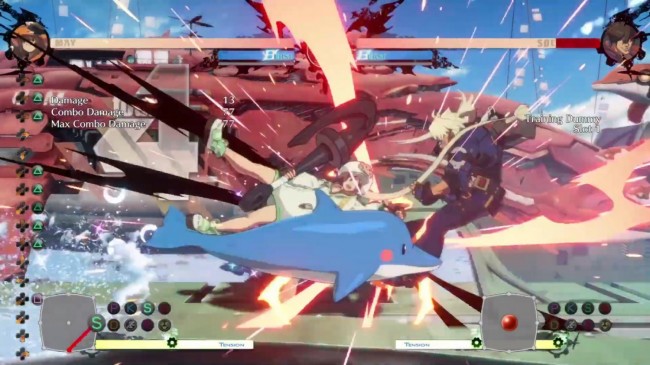 May's "Mr. Dolphin" Charge Special is a good combo starter as well as a move that can provide distance between the character and the opponent.
(Photo: Screenshot from Khaos Kutta's "Guilty Gear -STRIVE- | May Combo Video | Mr. Dolphin!")

Every time players of Guilty Gear Strive encounter May, especially during Online Matches, they will experience a lot of frustration all thanks to the character's playstyle that revolves around unique rushdowns.

The spunky first mate of the Jellyfish Pirates, according to Sportskeeda, has a slow yet hard hitting move set with only two mobility options. This means that she has limited opportunities to escape an onslaught of attacks from the opponent, however she can dish out massive damage with a lesser execution barrier.

Because of this, May is a suitable character for beginners to learn more about the game as they progress within. Her heavy attacks, including her charge specials that involves around dolphins, can give distance to the opponents while preparing to rush them down with combos.

🐬 May mains to everybody else... ⚓#GuiltyGearStrive pic.twitter.com/oiELH9k3X9

Mr. Dolphin, May's "bread and butter" charge special, is an important move in her arsenal. It has two variations: Horizontal (← charge → + S or HS) and Vertical (↓ charge ↑ + S or HS).

In this move, May will dash towards the enemy while riding a dolphin in any direction, either forwards or upwards. This charge special is fast and acts as a good poking tool, but it can become effective if it lands a counter-hit.

Aside from a potential high damage, Mr. Dolphin also has an increased chance to stun opponents, making may initiate combos after doing the said charge special.

Aside from Mr. Dolphin, May also has two other specials in her arsenal - Arisugawa Special (↓← + P or K), her only projectile move, and Overhead Kiss (→↓ + K), a command throw.

Arisugawa Special can be used only in closing any distance between May and her opponent. It does not have good damage, but due to its trajectory and sustainability, the move can be a good initial set for May to do combos.

This is also the same with Overhead Kiss. The move itself also does not inflict much damage, but it can also be a good combo starter. This move diversifies May's offensive moveset that has full of slashing and dolphin summoning.

According to Sportskeeda, while a run-up command grab can be the most obvious way to land Overhead Kiss, it can be much safer to connect while using the heavier Mr. Dolphin to counter-hit.

May also has 2 supers - Great Yamada Attack (↓→↓→ + S) and The Wonderful and Dynamic Goshogawara (→↓←→ + HS). The first one, which is May's signature super, is a basically a projectile-based super that can land hits thrice.

Great Yamada Attack is a reliable super that can initiate closing the distance before starting an offensive. However, due to its slow start up, it is easy to react to the move.

The Wonderful and Dynamic Goshogawara or just Goshigawara for short, can be used in a middle of an enemy offensive. Due to its fast start up, the move can also use an initiator for combos.

May's attacks and combos are heavily relied on Slash (S). Her S attack has a great range while on standing or crouching, and can be a good initiator for her basic combos, especially from her standing S.

A good example of using S as a combo starter is this basic combo TheGamer.com shown in their article -- S > 5↓S > ←→ S. You can also initiate the same combo by jumping in with High Slash (HS).

If you are in a pressure that was initiated by your opponent and need to pull out a fast combo to escape said pressure, then you can input Punch (P) as your starter, like this simple yet swift combo -- 5↓P > P > P > ←→ + S.

Not only did you escape but you also deliver swift punches as well as pushing back your opponent using Mr. Dolphin, giving you the space needed after being cornered.

Finally, you can pull out and utilize your Wonderful and Dynamic Goshogawara super using this quick combo - S > → P > →↓←→ + HS. This combo is best initiated against a wall, which you can deal an easy 240 damage to your opponent, which is half of a health bar for most characters.

Once learn these basic combos, you can explore other combo lines, then create your own as Guilty Gear Strive has a lot of room for personalized combo lines.

READ ALSO: 'Guilty Gear Strive' Early Access: What PS4, PS5 Players Would Get, How to Pre-Order