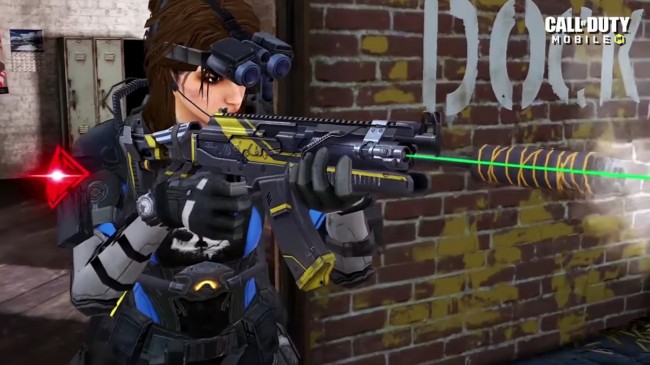 In Call of Duty: Mobile's Season 5, players can now obtain the CR-56 AMAX, like the one seeing in this screenshot.
(Photo: Screenshot from AnonymousYT's "*NEW* CR-56 AMAX GAMEPLAY in CALL OF DUTY MOBILE!! HYBRID SCOPE LEAKS, CREDIT STORE UPDATE & MORE!!")

A new season await the players of Call of Duty: Mobile as its Season 5 will go live today, June 28th, at 5:00 PM PDT.

Along with the new season are the new content, including a new event, new multiplayer modes, maps and weapon blueprints, as well as a new Battle Pass, perk, and rewards.

According to the blog post in the Call of Duty website, there will be three new maps that will be released in Season 5 and used in the multiplayer mode.

🌊 Season 5: In Deep Water
⚓🤿 Lower your anchors and get ready to dive into the new season!

🆕 New season is deploying to #CODMobile early next week, but check in-game now for the return of a legend 😎! pic.twitter.com/FKRwPCC6Kc

These are Suldal Harbor, a medium-sized tactical map filled with shipping crates, narrow alleyways, and close-quarter interiors; Docks, a small-sized map with plenty of vertical play; and Aniyah Incursion, a bombed-out palace that was surrounded by military supplies and housing.

The former will make its players enter the cranked state for a boost as they will keep the times by eliminating enemies or collecting dog tags, while the latter will bring the Domination game mode to a bigger scale with five new capture points and an enabled 10 players-versus-10 players (10v10) play.

The blog also stated that there will be new set of content that will be shipped in the game during Season 5 for the said season's Battle Pass, both in Free and in Premium Tiers. This included ocean-ready Operators, weapon blueprints, calling cards, charms, Call of Duty Points, and more.

For the Free Tier, players will receive an Operator skill where they can summon a K9 Unit, while for the Premium Tier, they will receive four new Operators, two of which are from previous Call of Duty titles - Merrick and Man Hunter Rorke from Call of Duty: Ghosts, as well as Backstroke Otter and Foreshadow Roze.

How to Unlock the Gung-ho Perk

A new perk was introduced for Season 5 - "Gung-ho." According to Dot ESports, when the perk is equipped, players can hip-fire their weapons, throw projectiles like grenades, and change ammo while sprinting.

This perk is perfect for those quick escapes or a calculated blitzkrieg attack against the opposing player or team.

The said perk, according to Sportskeeda, will be added in those Seasonal Events and players will have to complete a set of challenges within those events in order to unlock it. If they will base several previous Seasonal Events for this one, then those challenges will be involved heavily on multiplayer grind.

How to Unlock the CR-56 AMAX assault rifle

Both Free and Premium Battle Pass Tiers will have one functional weapon up for grabs - the CR-56 AMAX assault rifle. According to Essentially Sports, the said assault rifle was first seen in Call of Duty: Warzone, where it dominated the meta game.

The arrival of the ­CR-56 will might have initiated a meta shift in Call of Duty: Mobile as the QXR and the PP19 Bizon sub-machine guns will be nerfed, according to Sportskeeda.

In order to claim your own CR-56, you must clear a specific tier in your Battle Pass. The said assault rifle will be unlocked after you clear Tier 21 if you are following the Free Battle Pass.

TAG Call of Duty, Call of Duty: Mobile
© 2020 Game & Guide All rights reserved. Do not reproduce without permission.