Fortnite Chapter 2 Season 7 Week 4 Challenges Guide: Where to Find, Collect the Doomsday Prepper Guide + How to Accomplish Other Legendary Quests This Week 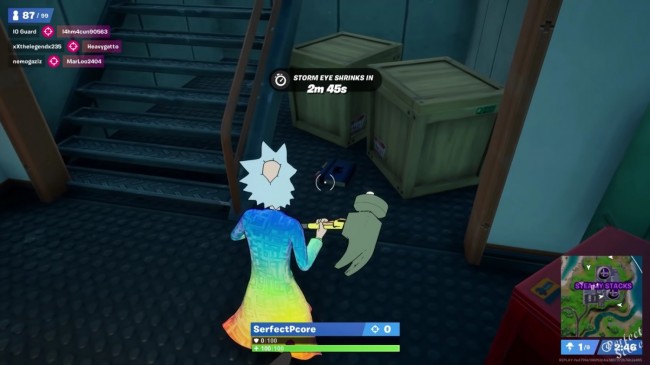 Another week means another set of quests for Fortnite players as its Alien Invation-centric Chapter 2 - Season 7 continues.

This week, which is the Week Four of the said season, will have a set of quests including search inside a farm for clues, visiting a farmer's favorite places, placing missing person's signs, and locating several Doomsday Preppers Guides that are scattered across the map.

According to Forbes, this set of Legendary Quests for Week 4 revolves around Farmer Steel, an in-game non-playable character (NPC) who is gone in hiding for "mysterious reasons."

To start your Week 4 Legendary Quests, you must first go to the Steel's Farm, a small farm which is located northeast of Corny Complex.

READ ALSO: 'Fortnite' Alien Artifacts Week 3 Locations Guide Within the Map & How to Get Them ALL in Chapter 2 Season 7 Quest

According to PC Gamer, there are only 2 clues that you need to grab in this area. You will recognize them as semi-transparent magnifying glasses that are floating in the area.

There are four locations within the farm that you can search for that aforementioned magnifying glass. According to Eurogamer, the first clue can be seen near a pile of logs, which is located north of the farm house on the opposite side of the river.

The second clue can be found in a cluster of stones just east of the bridge which is connecting between Steel's Farm and Crony Complex.

The third one can be seen on the trees just near the famr house, while the fourth clue can be found next to the tractor in the cornfield.

PC Gamer said that you will need to bail out of the area after the quest because it has a low weapon spawn rate, making more difficult to get once a fight break out within the area.

Farmer Steel, according to Forbes, is a one hungry fellow who always visits eateries. With this clue in mind, you will know that the places that you will visit in this quest are eateries within the game's map.

According to Game Rant, you must go to the first location, the Pizza Pit. The restaurant is located at the Farmer's Market just north of the Corny Complex. Once you get close enough to the location, check your quest log and wait for the number in the quest counter to go up. Once it is done, more to the next location.

The next landmark is the Lake Canoe, which is in the southeast of Corny Complex not too far from the Steel's Farm. Once the number of the quest marker in your quest log moved up, proceed to the last location, which is the Flopper Pond. This location is just east of the Holly Hedges.

Your third Legendary Quest for the Week 4 involves you placing several missing person signs in specific places in the map, particularly in the Weeping Woods and in the Misty Meadows.

According to Games Radar, there are five locations in both Weeping Woods and Misty Meadows that you need to go to place the missing person signs.

In Weeping Woods, you need to go to these five locations - First, on the north side of the largest building that is near the balcony edge. Then, the next location is right next to the hut surrounded by trees next to the river.

Then, go to the third location which is by the west entrance to the second largest building which is facing the pond. Then, run towards the east entrance of the same building to go to the next location, which is near the Weeping Woods sign.

The last location for the Weeping woods part is in the outside of the shower block just southwest of the RV park.

For the Misty Meadows, you must go to the first location, which is by the bus stop at the west end of the location. Then, go to the bottom of the stairs next to the building where the second location is.

Next, go to the third location, which is outside of the Oink Butchers Shop, then go towards the entrance to the blue hotel for the fourth location.

Lastly, for the fifth location, go outside the bar hut at the northeast end of the location.

For your final Legendary Quest for the Week 4, for now, you need to find the Doomsday Prepper Guide. Unlike the previous three quests, this one needs you to look for a one item only.

According to Gamespot, the said guide can be found at Hydro 16, a brick building that houses operations of a hydroelectric dam just west of the Lazy Lake. The lake itself is north of Misty Meadows. When you are in the Misty Meadows, head towards Hydro 16, then enter the ground floor.

Once you are inside, look for the small office that is beside the metal stairs. Inside, you will find few items scattered, including a desktop computer and a filing cabinet. From there, you will see the guide sitting on the ground. Interact with it to complete the quest.

The said guide will reveal you the developing story for Chapter 2 - Season 7, which includes a speculation that all of the Fortnite's NPCs, Farmer Steel included, are abducted by aliens and they are in the Mothership somewhere.