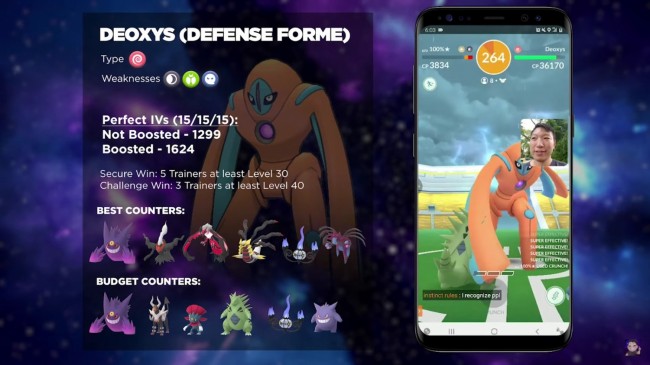 Deoxys (Defense Forme) returns in Pokemon GO after a long absence as the tanky form of the Mythical Generation III Pokemon will become a part of the 5-star Raids.

The said return was part of the game's Season of Discovery, which included the appearance of Regirock, Regice, and Registeel, all of which are also part of the 5-star Raids.

According to Dexerto, Deoxys (Defense Forme) is well-known to be one of the best fighters that was included in every player's Pokemon line-up in every Great League and Master League in the game.

Get to Know Deoxys (Defense Forme)

In order for players to have their own Deoxys (Defense Forme), they must catch it first during said raids, which will be a difficult task. According to Sportskeeda, the defensive form of the Mythical Pokemon has a maximum defense stat of 330, making it a tank that will took a lot of beating before being caught.

But despite of its defensive advantage, the attack stats of this Pokemon was suffered and its damage potential is curbed.

However, Deoxyz (Defense Forme) has a good attack setlist with its Zen Headbutt and Counter Fast Moves, along with its Charged Moves like Thunderbolt, Rock Slide, and Psycho Boost, which is a move exclusive for Deoxys.

But with all of its good attacks and a maxed-out defense start, Deoxys (Defense Forme) has its weakness.

According to a chart from Eurogamer, Psychic-type Pokemon, like Deoxys and its forms, including its Defense Forme, are weak against Steel, Dark, and fellow Psychic-types, as well as they are vulnerable to Bug, Ghost, and Dark-types.

With this fact in mind, players will have to consider forming their Pokemon team that will be focused more on Bug, Ghost, and Dark-type Pokemon, and attacks based on the said types.

How to Combat Deoxys (Defense Forme)

As mentioned, before facing Deoxys (Defense Forme) in a 5-star Raid in Pokemon GO, you should consider the Pokemon team line up that you are making based on its weakness.

Pokebattler.com suggested Ghost-types like Mega Gengar, Shadow Banette, Giratina (Origin), Chedelure, and Shadow Mismagius to be a part of your Pokemon team along with Bug-types like Shadow Pinsir, Shadow Scizor, Mega Beedrill, and Genesect.

Mewtwo and Shadow Raikou can be good members of the team because of the inclusion of "Shadow Ball," a Psychic-type attack, in their attack setlist.

Also, facing Deoxys (Defense Forme), according to Bleeding Cool, needs to be a co-op task, which up to four players are the minimum, considering that the Pokemon has a great defense stat.

Once you defeat Deoxys (Defense Forme), you can use the Circle Lock Technique to guarantee a Great or Excellent throw. You also need to add Golden Razz Berries as it will guarantee a great chance to catch the Pokemon.

Deoxys (Defense Forme) will be available to encounter in the 5-star Raids in Pokemon GO until Friday, July 16th, at 10:00 AM.