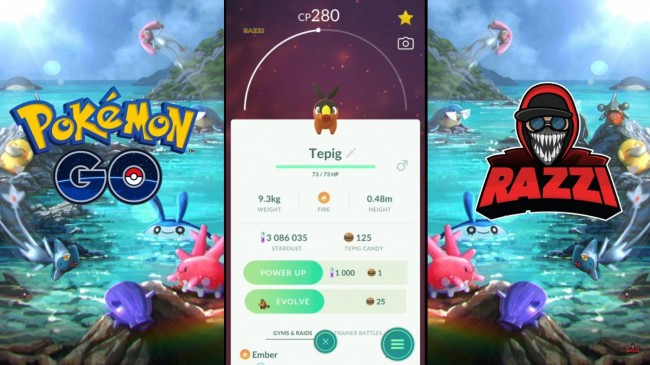 It's that monthly event in Pokemon GO where the game's community meet for fun and catching Pokemon as Community Day is back for this month of July.

This month's Community Day will feature Tepig as the event's Pokemon in focus. One of the three starter Pokemon of the Unova Region that debuted in Pokemon Black and White, the Fire Pig Pokemon will have an increased spawn rate within the game during the duration of the event.

According to GamePress.gg, Tepig can be obtainable through catches or special researches. The event will also make way for the Shiny version of Tepig, which it has an increased chance of being spotted during Community Day hours.

#PokemonGOCommunityDay featuring Tepig starts in a few hours, Trainers! Here’s an image with information to keep in mind as you enjoy this limited-time event. 🔥 pic.twitter.com/kmYAtn0WGF

Keep in mind that when they are combatting and catching Tepig, they need to know its weakness. Based on a chart made by Eurogamer, Fire-type Pokemon, Tepig included, is weak against Rock, Dragon, Water, and fellow Fire-types and vulnerable to Ground, Rock, and Water-Types.

With this in mind, they need to have their Pokemon Team that is focused on these types in order to catch Tepig easily. Also, players need to have items such as Incense and Lure Modules for Tepig spawns within the area.

For this Pokemon GO Community Day, players will have the opportunity to do the event-themed "Roasted Berries" Special Research.

This research will give them the opportunity to catch a Tepig aside from the usual encounters in the game.

According to Dot ESports, Roasted Berries had four pages, or phases that needs to be completed. In the first page, you must Power up a Pokemon 10 times, catch 15 Tepigs, and make five "Nice Throws" while catching a Pokemon.

Completing these first three tasks will reward you with Poke Balls, Tepig Candies, an Incense, Stardusts, and a Tepig Encounter.

In the said research's second page, you need to catch 15 Tepigs, Transfer 10 Pokemon, and Evolve three Tepigs. Accomplishing the second half will get you Tepig Candies, Pinap Berries, XP, an Incense, and both a Tepig and Pignite encounters.

In page three, you need to make three "Great Curveball Throws," Evolve a Pignite, and Transfer 10 Pokemon. Fulfilling these three tasks will you Tepig Candies, a Lucky Egg, Great Balls, Ultra Balls, XP, and a Rocket Radar that you can use to find Team GO Rockets grunts or Giovanni.

Once you accomplish the third page, you will be rewarded with two Silver Pinap Berries, 3,500 XP, 3,000 Stardusts, two Rare Candies, and both a Tepig and an Emboar encounter.

Aside from the Tepig extravaganza, the Community Day event will also give more bonuses for Pokemon GO players. According to Forbes, Any Embroar that will be evolved during the duration of the event will receive a Blast Burn attack, which is an effective move during PvP.

To make this Community Day even more fun, players can take a snapshot during the event for a Photobomb.

They should keep in mind that they need to follow stricter health and safety protocols to avoid the spread of the Covid-19.