Destiny 2 'Season of the Splicer' Iron Banner Weapons Guide: How to Get the Finite Impactor Hand Cannon + its God Rolls 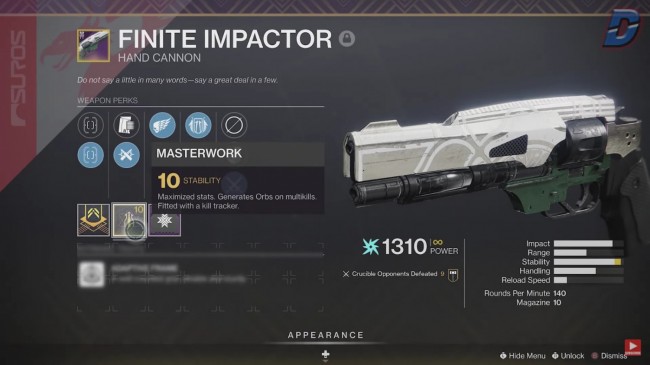 Destiny 2's Season of the Splicer brought in a plethora of new weapons for its players to test their abilities and skillset in-game, including a returning arsenal from the Iron Banner.

A 12-person player-versus-player (PvP) mode for the game's Crucible that can only be around for a week each month, the Iron Banner, according to Screen Rant, rely upon a player's Light Level to determine its raw effectiveness in combat.

The lower a player's Light Level, the harder it is to challenge opponents who have been grinding for a while.

The game mode gives rewards to its players to earn, including armor and weapons that can bought using Iron Banner Tokens, which can be earned by winning matches or completing any available bounties for purchase from Lord Saladin.

READ ALSO: Destiny 2 Corrupted Key Codes: How to Farm? Should You Use Them?

There are weapons that can be used in Iron Banner that can be unlocked if they can fulfill a specific quest. One of which is the Finite Impactor Hand Cannon.

A 140 rounds per minute (RPM) adaptive fame Arc hand cannon with well-rounded stats across the board according to Windows Central, the Finite Impactor was the best choice for the fans of the game that loves snappy hand cannons that are best suited for medium-range combat.

This Legendary hand cannon has an adaptive frame and a well-rounded grip, making it sturdy, reliable. As for its stats, it has 84 for Impact, 42 for Range, 51 for Stability, 50 for Handling, and 46 for Reload Speed.

This means that the hand cannon is great for dealing damage, and thanks to its adaptive frame, it has both good stability and handling.

How to Earn your Own Finite Impactor

According to Screen Rant, you can acquire the Finite Impactor easily by first completing the first step of the Iron-Handed Diplomacy. In order to do this, you need to capture 10 zones, get 10 Arc or Void ability final blows, and defeat 30 Guardians, all while playing in the Iron Banner mode.

However, this will not a guarantee a Finite Impactor that has "God Roll," or when a better perk combination is available for a weapon. In order to obtain it, you need to continuously grind for the Iron Banner Tokens until you hit the maximum number of tokens needed to redeem a reward.

The good news about this method is that you only need four wins before you hit the minimum number of Iron Banner Tokens that is needed to redeem a reward.

As mentioned, God Rolls are a best set of abilities that are available for a specific weapon. In order to obtain that kind of roll for that weapon, you need to have a right amount of Iron Banner Tokens and a strong reliance to RNG.

Forbes suggested in their article that you can first focus on obtaining a Finite Impactor that has these following perks - Heating Up, Killing Wind, Multikill Clip, or Iron Reach. The combo choices for these four perks will depend on your personal reference.

If you want your Finite Impactor's 140 RPM felt like a weapon that can shoot 180 RPM, you need to target the Under Pressure/Iron Grip God Roll combo, while for optimal 1v1 PvP win, you can focus on getting the No Ditractions/Eye of the Storm God Roll combo.

READ ALSO: 'Destiny 2' Season of the Splicer Week 6 Challenges Guide: How to Clear Them ALL Fast!