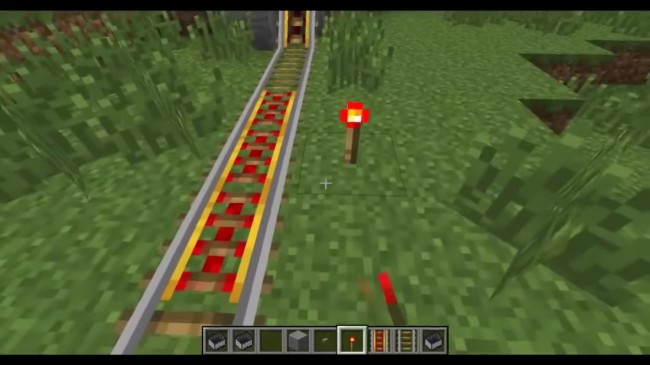 In Minecraft, rails are one of the most common ways players can use within the game for transportation purposes, ranging from moving inside the mines to creating rollercoasters and rail systems to travel across several places in the game.

There are different types of rails that players can explore in Minecraft according to an article by Sportskeeda. Each of these rails have their uses aside from transportation and how they create. One of which is the Powered Rails, the second most common type of rail.

How to Make the Powered Rails

Powered Rails, by appearance, may looked similar to the regular rails in-game except with the two yellow lines along the metal rails and red intersecting lines in the interior.

According to Game Rant, building said rails required a hefty amount of investment of materials and can be quite a drain on a player's resources, particularly gold.

READ ALSO: Top 5 List of Ores in Minecraft's 'Caves and Cliffs - Part 1:' Locations to Mine + How to Get Them Easily

In order to build your very own powered rail, you must first acquire gold. Gathering gold became easier during the game's "Caves and Cliffs: Part 1" update. According to a separate guide from Sportskeeda, players can either mine gold inside a cave or do strip mining in a specific spot within the game.

Gold can be mined using the iron pickaxe, and can be smelt into a gold ingot, which is one of the essential building block in making your own powered rails.

Once created, these powered rails can be placed anywhere just like the other rails in Minecraft, except the fact that these rails need power. Redstone dust "wires" within those tracks can transmit power, causing them to light up, the rails become activated, and accelerate a mine craft.

Once created, the powered rails have a plethora of ways on how to use them. Sportskeeda sums them up into its article, saying that there are three ways in doing so.

Firstly, powered rails can maintain a minecart's top speed. This is after a fact that these carts can lose speed after passing an amount of blocks. You can maintain its speed by placing a powered rail every 38 blocks after the initial three powered rails.

READ ALSO: 'Minecraft' 1.17 Update: What Features Will 'Caves and Cliffs: Part 1' Give to its Players, When is its Release Date