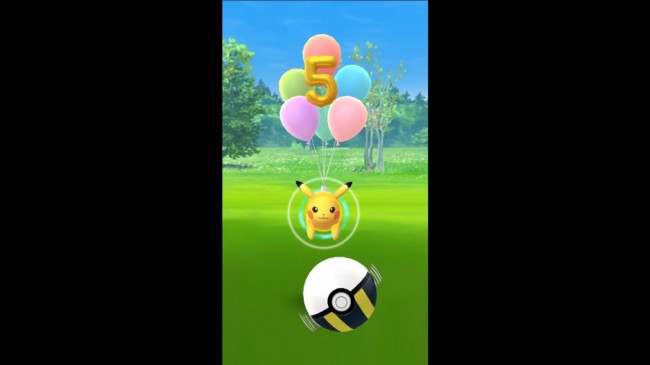 Trainers inside Pokemon GO will encounter this Flying Pikachu with a 5-shaped balloon in either the wild or in one-star raids during the game's event that celebrates the smartphone app's 5th year anniversary.
(Photo: Screenshot by Newb Daddy Gaming's "Flying Pikachu with a 5-shaped balloon | Pokemon Go 5th Anniversary #shorts")

Pokemon GO, the famous Pokemon app that made all of us glued to our smartphones and transformed us into Ash Ketchum while catching Pokemon in any random places, is turning five.

To celebrate this milestone, Niantic, the developers of the smartphone app, announced an event that will take place within this month of July.

The said anniversary event gives its players bonuses, special events and researches, and an event-only Flying Pikachu with a 5-shaped balloon that Pokemon GO trainers can easily spot in-game.

What an incredible five years they’ve been! To commemorate this milestone, we’re holding a celebration event featuring Flying Pikachu with a 5-shaped balloon and more! https://t.co/ZprUNVEnLw pic.twitter.com/SIbAFf2Vqg

Along with the aforementioned Flying Pikachu, Darumaka is also up for grabs as it both of these Pokemon will be appearing in one-star Raids in the game. According to Express, Trainers will also have the chance to catch the Shiny Version of Darumaka, as well as a Shiny Version of Meltan.

Aside from the raids that become one of the sources of Pokemon to catch, all of the Pokemon region starters that are available in-game will be spawning around PokeStops during the event.

According to 9to5Mac, these PokeStops will have active Lure Modules that will increase the number of these Pokemon that will be attracted towards a PokeStop. This is perfect for those who are taking up the Collection Challenge quest in Pokemon GO, according to Gamepur.

Speaking of the Collection Challenge, the said challenge will also be open for trainers to take and complete in Pokemon GO. Completed, they can have a chance to encounter the Flying Pikachu, as well as Rare Candy and massive amounts of Poke Balls.

Also in the anniversary event, a Jump-Start Special Research will be available during the said event's duration for any trainers who missed out on it during the last year's anniversary celebration.

This Special Research, according to 9to5Mac, is designed to help the players catch up with the rest through the help of Stardust and XP, as well as Pokemon encounters, that will be given to them as rewards once they finish several sub-tasks.

Another bonuses and perks Trainers will receive during the game's anniversary event includes fifth anniversary stickers when they skip PokeStops and open gifts, Item Bags that will be expandable up to 3,500 during the event, and Adventure Boxes containing in-game items.

How to Catch the Event-Exclusive Flying Pokemon

The event-exclusive Flying Pikachu with a 5-shaped balloon will be the apple of the eye in Pokemon GO's fifth anniversary event, and Trainers have a limited time to capture this Pokemon.

According to Gamepur, the Flying Pikachu is an Electric-type Pokemon despite the "Flying" in its name. And if we follow the chart provided by Eurogamer, Electric-types are weak against Ground, Grass, Dragon, and fellow Electric-types and they are vulnerable to Ground-types.

With this in mind, you need to have a Pokemon team consisting of Pokemon whose types are listed above that you can use during the 1-star raids and battle the Flying Pikachu.

Aside from raids, you can also capture the Flying Pikachu in the wild or as a reward from completing the Collection Challenge.