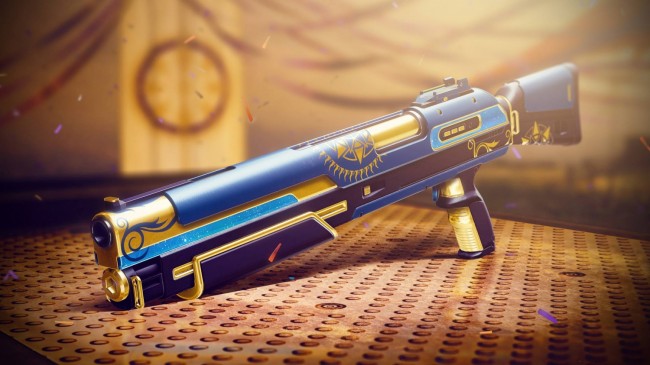 The Compass Rose, the event-themed legendary shotgun that is up for grabs for Destiny 2's "Solstice of Heroes."
(Photo: Photo by Bungie's Destiny 2 Website)

With the Solstice of Heroes getting started in Destiny 2, players are now grabbing the opportunity of grabbing free armor, weapons, and items in this month-long in-game summer event.

Along with Solstice Armor, which can be unlocked after players "repaired" an armor set that was handed by Eva Levante through various quests, the event-themed Legendary shotgun, which is named as Compass Rose are also up for grabs.

According to GFinity, the Compass Rose shotgun has the following stats - 70 for Impact, 66 for Range, 47 for Stability, 53 for Reload Speed, and 42 for Handling.

It also has 12 in terms of Zoom or factor of magnification granted when aiming down sights, 73 in Aim Assistance, and 75 is Recoil Direction. It has an Inventory Size of 45, making its reserve ammunition having a bit less more space in the inventory.

READ ALSO: Destiny 2 'Solstice of Heroes' Guide: How to Get 12 Un-Sunset Weapons Returning + What Other Content Players Would Expect

Speaking of ammunition, the shotgun has 5 magazines and can shoot 65 rounds per minute (RPM).

With these stats in mind, the shotgun itself can dish out high damage thanks to its high Impact stat, as well as having a great Range and a good Reload Speed, but it has a less average Stability and Handling, making the Compass Rose a great close-range weapon.

As for its perks, you can focus on having a Compass Rose that has both Quickdraw and Snapshot for its God Roll.

However, the Compass Rose might be affected by the recent Destiny 2 update. According to the patch notes posted by Bungie, the developers of the game, shotguns, including the Compass Rose, will have an increased Aggressive Frame cone angle to 4.25 degrees from 4.0 degrees.

This tweak, according to Gamespot, will make the weapon less of a default weapon for most of the players and become less of a guaranteed one-hit kill going forward.

How to Get the Compass Rose

As mentioned before, the Compass Rose shotgun can be acquired through the loot drops during the Solstice of Heroes event. According to Dot Esports, players need to open Solstice Packages, which can be opened through Solstice Key Fragments, so they need to grind more often in order to obtain those items.

Also, they need to rely on luck as RNG is involved in these loot drops, which might give not just the shotgun itself, but also armor, material, weapons, or even an event-exclusive Solstice gear. Despite its unknown drop rate, players are guaranteed to secure one Compass Rose before the event ends.

A good way to have a great possibility of having the weapon is by the European Aerial Zone, a Solstice of Heroes-exclusive event where players can make an online match within an event-exclusive zone before facing as many minibosses as possible before facing the primary boss.

READ ALSO: Destiny 2 'Season of the Splicer' Iron Banner Weapons Guide: How to Get the Finite Impactor Hand Cannon + its God Rolls