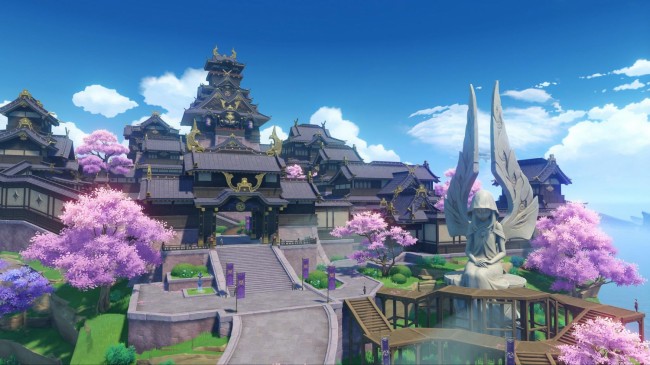 Inazuma, the archipelago where its buildings was heavily inspired by Japanese architecture, will be the feature location for Genshin Impact's Version 2.0 Update this coming July 21st.
(Photo: Photo from PlayStation's Twitter Page, @PlayStation)

Game developer studio miHoYo has revealed in a video trailer the long-awaited Version 2.0 Update of Genshin Impact. The said update will feature a new in-game location as well as new companions and several gameplay improvements.

According to Kotaku, the said update, entitled "The Immovable God and the Eternal Euthymia," will be the largest for the multiplayer online role playing game (MMORPG) as it will jump from its current Version 1.6 to the planned Version 2.0.

Genshin Impact's Version 2.0 will debut a new in-game area, Inazuma. According to Attack of the Fanboy, the said update for the MMORPG will focus more around this location, which is heavily inspired by Japan because of its architectural designs and the oriental eastern-themed tunes in the background.

Overcome endless thunderstorms, set foot on the island of cherry blossoms, and witness the Eternity pursued by Her Excellency, the Almighty Narukami Ogosho.https://t.co/GdoDnb6GAa#GenshinImpact

The said tunes, according to Kotaku, was recorded in collaboration with the Tokyo Philharmonic Orchestra to capture the authentic Japanese flavor for the said location.

According to Gamespot, this lightning-themed archipelago consists of six main islands and a series of islets. Scattered within the areas are locations such as the Grand Narukami Shrine and the Sacred Sakura on the mountain of Narukami Island.

It is worth noting that three among its six main islands can be accessible, but according to miHoYo, new available content that will come with the version update can unlock the remain islands along with a wealth of stories and secrets to uncover.

Along with the new location, new characters will be introduced in the same version update. According to Attack of the Fanboy, Ayaka, Yoimiya, and Sayu will be the new companions for the players in Genshin Impact for the "The Immovable God and the Eternal Euthymia" release.

Ayaka is a Cryo user who wields a katana and a fan, while Yoimiya is a Pyro user, wields a bow, and an expert in fireworks and Sayu is a ninja who wields both a massive claymore, wears an adorable Tanuki-inspired cloak, and has an Anemo Vision.

Finally, the Version 2.0 Update will also bring the cross-save function across multiple gaming platforms such as PlayStation 4, PlayStation 5, PC, and smartphones, opening the cross-platform possibilities for Genshin Impact.

Along with it, according to Gamespot, are refined character shading, haptic feedback support for the PlayStation 5's DualSense controller, and other feature optimizations.

Genshin Impact's Version 2.0 Update, "The Immovable God and the Eternal Euthymia," is set to be released in July 21st.

In celebration of the incoming Version 2.0 Update, the Japanese Twitter Page of Genshin Impact posted three new Primogem codes that can be lasted for a day. This codes, once unlocked, can give players amounts of Primogem, Mystic Enhancement Ores, Hero's Wit, and Mora.

In order to redeem these codes, according to Comicbook, you must first to be Adventure Rank 10. Once you are on the rank, you can proceed to the Settings tab, then navigate to the Account section where you can see the "Redeem" option.

You can also enter those codes in a dedicated webpage in the game's website, where you can do the same process there. Once you entered the codes using either methods, you will have said rewards, which will be sent in your in-game mailbox.

READ ALSO: Genshin Impact 'A Thousand Questions with Paimon' Guide: What are the Answers you must Enter