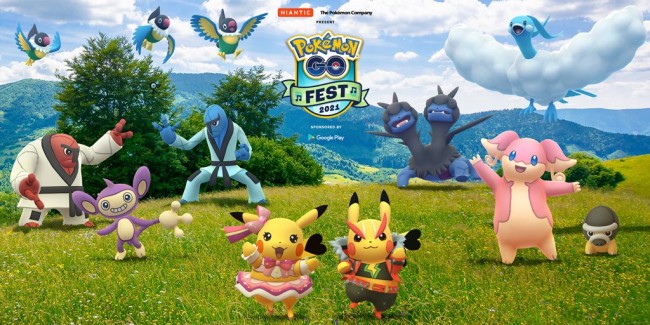 "Pokemon GO Fest" returns this year to the famous Pokemon smartphone app as it is celebrating its 5 years since its release in July 6th, 2016.

As the event nears, trainers are now preparing themselves by buying its tickets, which holds benefits that they could enjoy. The event itself will also have bonuses prepared, including rotating habitat hours and Legendary Pokemon spawns

How to get your Pokemon GO Fest Tickets

Pokemon GO trainers who wants to participate in the GO Fest will need to purchase a ticket through the in-app shop in order to enter. As for the its price, Republic World said that it was slash down from its usual price of $14.99 to $4.99.

We’re excited to welcome @GooglePlay as the official event sponsor of #PokemonGOFest2021!

Players who have their hands on the tickets for the event are now able to collaborate with other players from all over the world through the Global Challenge Arena, while competing in the hourly challenges.

According to BGR, completing those challenges will give them bonuses along the way, which will last for the remainder of the hour. If a trainer is able to complete all of these 24 hourly challenges, they will unlock Space, Time, and a mystery bonus which will be revealed by the game in due time.

Other benefits that will players will get while possessing the ticket, according to Republic World, includes earning an extra 10,000 XP for winning a Raid Battle, as well as 10 Raid Passes, which can be used for in-person raids, every time they spin the Gym Photo Discs.

Once the event kicks off, according to Republic World, trainers will experience several Pokemon spawns, included four themed rotating habitat hours, each has its Collection Challenge.

The aforementioned Global Challenge Arena will also be active throughout the event for trainers around the world will work together to unlock its bonuses. Over 75 species of Pokemon will be spawned within the wild, as well as in raids and by completing Special Research Tasks.

Aside from that, two specially costumed event-only Pikachu is set to appear in the event. According to Bleeding Cool, the Pop Star Pikachu and the Rock Star Pikachu will appear in the game and trainers may either one of them once they completed their Special Research tasks.

As a celebration for the GO Fest, Niantic, the developers of the smartphone app, have partnered with Google to give the trainers perks and rewards.

According to DRP, this includes a free access to Youtube Premium for three months, A Google Play Points multiplier on all purchases made in the game, exclusive collaborative content with YouTube content creators The Try Guys, and a Google Play-sponsored Gift. This sponsored gift includes an Incense, a Super Incubator, and 30 Ultra Balls.

Celebrate the GO Fest at home

Finally, Pokemon GO will give its trainers a chance to celebrate the GO Fest with the Pokemon GO Fest Print at Home kit. This kit, according to DBLTap, can transform their spaces into a festive one with the help of free official 'do-it-yourself' (DIY) paper crafts and decorations for a limited time.

According to the blog post in Pokemon GO's website, this kit includes life-size cutouts of Professor Willow, Spark, Blanche, and Candela, as well as paper crafts, a photo backdrop, and decorations like team flags, the event's logos and more. Trainers can download the said pack through the event's special website.

The Pokemon GO Fest 2021 will start on July 17th and will conclude on the following day, July 18.