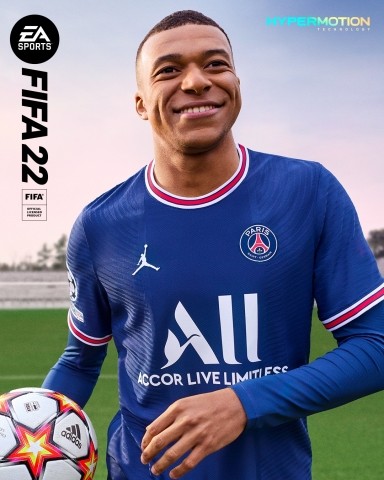 The cover of the FIFA 22, featuring Kylian Mbappé of Paris Saint-Germain FC
(Photo: Photo from the Press Release posted by Electronic Arts)

As football fans are glued in their seats during the UEFA Euro 2021 Final Match between England and Italy, with the latter won, Electronic Arts grabbed the opportunity coming from one of the biggest soccer events to launch and promote the new sequel of their FIFA video game franchise.

The game developers released the long-awaited FIFA 22, and it holds promise as it will be released with a new gameplay feature that will make the game even more realistic as if players are watching a real soccer game.

According to News18, FIFA 22 will feature over 17,000 players, spanning across 700 teams, all can be played inside more than 90 stadiums.

With new HyperMotion Technology, welcome to a revolution in
football gameplay. 🎮⚽

A newest gameplay feature to be used for FIFA 22, HyperMotion was introduced to add even more realism towards the soccer game, which is the focal point during the development of each FIFA game in the franchise.

According to Slash Gear, the said motion capture technology needed a total of 22 professional soccer players to capture the fluidity of their motion from runs to kicks to other soccer-based maneuvers with the help of machine learning.

Aside from the realism improvements, EA, according to GQ, also announced that the new FIFA game sequel will have a rebuilt complete goalkeeper system, a revamped Create a Club system for the Career Mode, a reimagined gameplay for its VOLTA FOOTBALL mode, and an introduction for the FIFA Ultimate Team Heroes.

The said Create a Club system, according to News18, will allow FIFA 22 players to create their own soccer club and set about their own football career in-game.

On the other hand, according to BusinessWire, several new in-game items that will represent the career stories and glory of famous players, as well as those who are fan favorites, will be featured in the new FIFA Ultimate Team Heroes game mode.

According to the press release posted by Electronic Arts, FIFA 22 will be available on October 1 and is set to release for PlayStation 4, PlayStation 5, Xbox One, Xbox Series X|S, Google Stadia, and in PC via the Origin Digital Store and Steam, while its Legacy Edition will available on the Nintendo Switch.

As for cross-play between consoles, Gamepur said that it won't might be the case because of the highly technological advancements of the game that is compatible to the new gen consoles.

In short, players will not be able to play with other on the Playstation 5 if you are playing the game using the PlayStation 4 or the Xbox Series X|S with Xbox One, and vice versa.

TAG FIFA 22
© 2020 Game & Guide All rights reserved. Do not reproduce without permission.