'Fortnite' Chapter 2 Season 7 Week 6 Challenges Guide: Where to Find and How to Use the 'Inflate-A-Bull,' Where to Place Cow Decoys 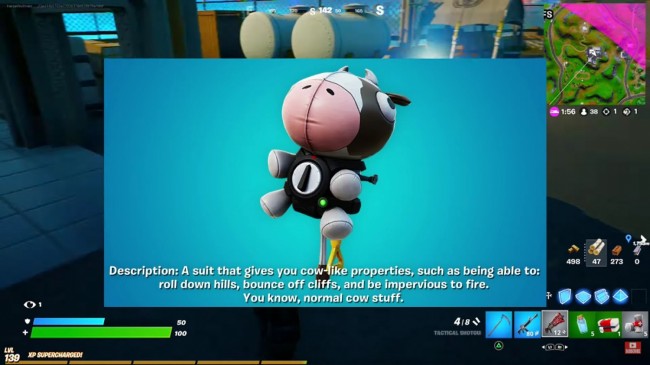 The Inflate-A-Bull consumable can make you roll down hills, bounce of cliffs, and become impervious to fire.
(Photo: Screenshot from TheUntouchableWolf's "Fortnite Season 7 Inflate A Bull - How To Use ULTRA Rare Inflate A Bull!")

Things will get "a-moo-zing" in Fortnite, especially the alien invasion is still rolling for its Chapter 2 - Season 7, as its players will receive new set of quests of the game's Week 6.

This newest set of quests will require players to locate an important item - the "Inflate-A-Bull" - as it will be used for two of the six Legendary Quests that can be completed for this week.

Where to Find, How to Use those "Inflate-A-Bulls"

A newest addition in the items category of Fortnite that was included after the recent 17.10 Update, the Inflate-A-Bull, according to Slash Gear, will make a player who will use this "wear" or deploy an inflatable cow costume whenever and wherever they'd like, enabling them to bounce off the ground.

Cows… why is it always cows with these Aliens? 🐮 Your guess is as good as ours. #HotSaucersLeaks

In a Tweet made by @iFireMonkey, the said consumable can also make the player roll down hills, bounce off cliffs, and be impervious to fire, however they could not able to use their firearms while wearing the said costume, while other players can pop the opposing Inflate-A-Bull.

READ ALSO: 'Fortnite' Chapter 2 - Chapter 7 Alien Nanites Guide: Where are They Located, How to Use Them

Inflate-A-Bulls are easy to find around the map and potentially has a higher chance of spawning in in certain locations. According to Attack of the Fanboy, players have a decent chance of finding them in places such as inside the Mothership, on top of the Abductors, inside random chests, and as floor loot.

Much like the Alien Nanites, which is a vital item for crafting weapons into alien tech weapons, Inflate-A-Bulls have a greater chance to spawn inside the Mothership and on top of Abductors.

To use the Inflate-A-Bull­, players can press the jump button while in the air. This will deploy the said consumable and gave the aforementioned properties to them. Do this and players will be earned 30,000 XP.

Where to Place the Cow Decoys

After inflating an Inflate-A-Bull­, players will place several cow decoys in farms within the Fortnite map. These decoys are likely the latest ploy from Doctor Slone, a major character to the in-game story of the Chapter 2 - Season 7. Doctor Slone was said to be hellbent on sabotaging the alien invasion inside the island.

According to Gamespot, there are fourteen locations from two places across the map, but the Legendary Quests required the players to locate only three and place those cow decoys in there. These decoy locations are placed in both Corny Complex and Steel Farm.

Players can place the cow decoys within the following locations in Corny Complex:

Much like in Corny Complex, there are seven locations within the Steel Farm that players can approach and place the cow decoys. These are:

Accomplishing this quest will also gain them 30,000 XP.