'Fortnite' LeBron James Skin: How to Get, Release Date, Price, New Content, and MORE to Expect 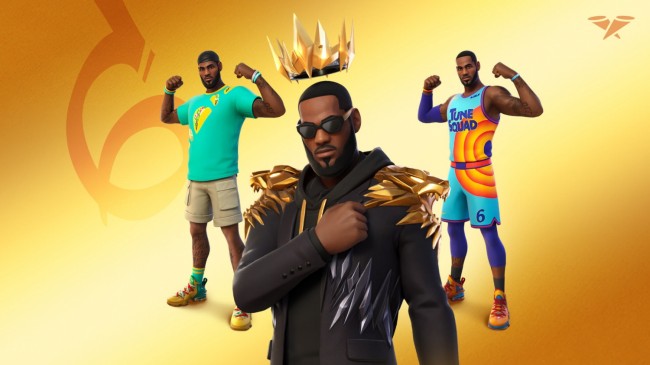 Along with his arrival in Fortnite, the outfits present in this photo for the LeBron James skin will also be in the game.
(Photo: Photo from Epic Games' Fortnite Webpage)

The King arrives at Fortnite as LeBron James becomes the new Icon skin for the shooting game. This is in preparation of the NBA superstar and Los Angeles Lakers small forward's appearance in Space Jam: A New Legacy as its newest protagonist.

The arrival of the basketball icon brings forth new content regarding him, including new outfits which one of them is in lieu for the release of the long-awaited Space Jam sequel this month.

According to Polygon, James will be arriving in Fortnite along with three newly designed outfits for players to choose from.

MVP. Global Icon. Gold Medalist. The King has arrived. @KingJames is bringing his legacy to the Icon Series. Read our blog for info about his Outfits, Gear and more.https://t.co/cfF6AmKqjA pic.twitter.com/8WklIyTRqz

READ ALSO: 'Fortnite' Chapter 2 Season 7 Week 6 Challenges Guide: Where to Find and How to Use the 'Inflate-A-Bull,' Where to Place Cow Decoys

The outfits will also come with respective sneakers, which are all designed after the life Nike LeBron 19 sneakers. These pair of sneakers are designed like the three new get-ups for the new skin, including the one that has a taco topping-esque colors and the other that has the colors of the Toon Squad.

Along with the new skins, according to Tom's Guide, are additional new weapons, accessories, and emotes, which from the looks of them, are designed after the basketball player's iconic logo. These include the Lion Pickaxe, the Wingspan Glider, and The Silencer, which is names after James' on-court celebration.

Aside from these, a new back bling which is designed after James' current Lakers jersey number was added for players to equip on their backs. According to PC Gamer, these cosmetics, as well as weapons, can be obtained by completing various challenges.

James is the only NBA players that became a skin in Fortnite, but he is not the only star that moved towards the video game's realm.

The shooting game also has skins designed after the football star Neymar Jr., musicians Travis Scott and Marshmello, and video game streamer Ninja, whose rise to fame cam while playing and streaming Fortnite.

The game also has fictional characters who also became skins such as T-800 and Sarah Connor from The Terminator, Thanos, and recently, Rick Sanchez from Rick and Morty.

According to PC Gamer, the LeBron James Fortnite skin will arrive in the in-game shop on July 14th at 8:00 PM ET. Fortnite did not posted any further about how much the skin, and its outfits, weapons, accessories, and other cosmetics, would sell for.

READ ALSO: 'Fortnite' Chapter 2 - Chapter 7 Alien Nanites Guide: Where are They Located, How to Use Them