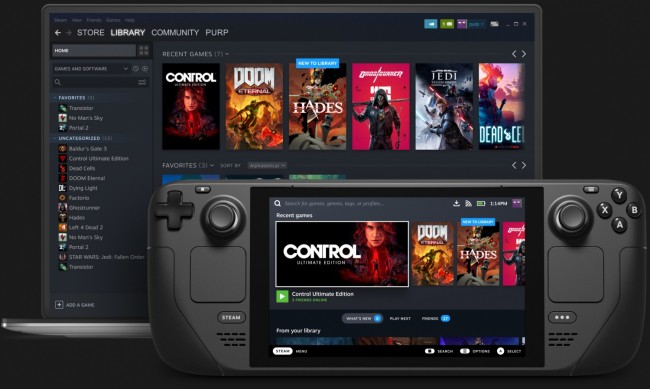 Ever since its release in 2017, the Nintendo Switch has been dominating the handheld video game console market due to its easier access and playability, especially its separable JoyCons and screen, which can be docked for TV gameplay.

Despite of this, several companies want to topple down Nintendo and its Switch and become number one in the market. One of said companies was Valve, a video game developing studio who produced games such as the Counter Strike series and DotA 2, as well as running the Steam digital online market.

Valve attempts to jump in the handheld console game with the release of their "Steam Deck," a handheld device that can play any game available in a user's Steam library. Despite being dubbed "a Nintendo Switch for PC Gaming" by PC Gamer, the Steam Deck is just more than that.

Learn more at https://t.co/ZOTx3KUCVK and reserve yours tomorrow. #SteamDeck pic.twitter.com/jcgbaKfT9c

Not Just a Handheld Console

From the looks of its design, the Steam Deck is looked like a bigger version of the Switch, with a typically cross-designed directional pad, two analog sticks, right and left shoulder buttons, and the usual "A-B-X-Y" buttons.

READ ALSO: 'Atari VCS' Official Release: Where to Buy this Modern Retake of a Classic

However, deep inside its small package is an AMD Accelerated Processing Unit (APU) hardware with a quad-core Zen 2 2.4-3.5GHz CPU and the RDNA2 GPU, making it a portable PC sealed into a handheld gaming device.

According to Windows Central, the Steam Deck is running on Valve's own Arch Linux-based SteamOS 3.0 Operating System. It also has a 16GB LPDDR5 random access memory (RAM) and a choice between the 64GB eMMC, 256GB SSD, or 512GB SSD internal storage.

It has an expandable microSD external storage card slot, a Bluetooth 5.0 version, a Dual-band Wi-Fi radio, both 2.4GHz and 5GH and a 3.5mm stereo headphone jack. It has a 40Whr battery that can last 2 to 8 hours of gameplay, and can be charged using its 45W USB Type-C PD3.0 power supply.

According to PC World, Valve claims that the Steam Deck will offer more than enough performance to run the latest AAA games thanks to its high-end specs, making up-par with the next-gen consoles such as the PlayStation 5 and Xbox Series X|S.

According to Kotaku, the Steam Deck will also have a docking unit like the Nintendo Switch, which users can charge the console in it as well as connecting it to an external display.

It can also support other gaming peripherals including arcade gamepads, as well as seamless cloud saving between the console and a PC, as long as it is tied to a user's Steam account. It can also allow other Steam features to work in it such as the Steam Chat and Remote Play.

Valve's Steam Deck was set to begin its shipping in December of this year. According to Kotaku, the said handheld console will be available for three different units - the one with 64GB eMMC costs $400, while the one with 256GB SSD costs $530, and the one with 512GB SSD costs $650.

However, according to Polygon, Steam will open pre-orders for the console starting from July 16th at 1:00 PM EDT.

In order to reserve a pre-order, they can use the digital online game marketplace's reservation system. They need to log-in first to steam before reserving a slot, which will cost them a fee of $5. According to the FAQs regarding the pre-order, Steam can only reserve one Steam Deck per customer.