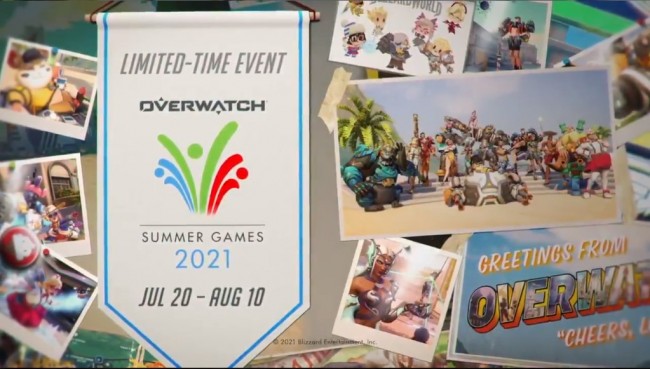 Summer will once again take over Overwatch as the game's seasonal event returns this year with the Overwatch Summer Games 2021. This was after Blizzard Entertainment, the game's developers, announced the comeback of the event.

Summer Games 2021 will bring new content to the players of the first person shooting (FPS) game, including new skins, a new spin to an event-exclusive classic game mode, additional cosmetics, and other changes that are in lieu for the event.

The Overwatch Summer Games 2021 will bring in new event-exclusive skins for some of their characters, some of which are already teased according to Dot Esports.

In a post in their Twitter Page, Blizzard Entertainment teased the Legendary Mermaid Character Skin for Symmetra, which according to Dexerto, a "manna from heaven" for those who main the Damage hero, considering that she has been on a longest Legendary skin drought.

Also teased is a summer-themed Skin for Ashe, and her trusty partner B.O.B., complete with a sunhat, a Super-Soaker, and a pink flamingo pool tube-like headpiece for the big metal robot.

Mei will also have a Summer Games 2021-exclusive Skin in a form of a drive-up ice cream shop attendant. The said skin will also give her robot sidekick Snowball a sweet make over that tiurns it into a floating chocolate dip ice cream cone.

These event-exclusive skins will be available either as contents in the seasonal loot boxes or as an in-game store item that can be bought through a direct purchase, which will cost 3,000 Credits for the Legendary Skins and 750 Credits for the Epic Skins.

Players can also unlock other summer-themed or sports-themed Character Skins by completing Weekly Challenges that will last during the duration of the Summer Games 2021. Other skins to expect are Sigma and Winston

What's in Store for Summer Games 2021

One of the highlights of Summer Games 2021 is the return of their classic Lucioball game mode. According to the event's special webpage, the said game mode will have its re-spin for this year's event entitled "Lucioball Remix," which is described to be a "faster and more chaotic version" of Lucioball.

Along with the return of the said game mode, Blizzard Entertainment will also release two updated arenas for Lucioball, the Sydner Harbour Arena and the Busan Stadium, bringing in different options to the field and giving its players more opportunities to showcase their skills.

As mentioned earlier, other Character Skins will be unlocked through Weekly Challenges, in which players will also unlock other cosmetics including sprays and player icons.

Overwatch's Summer Games 2021 will start on July 20th. According to DBLTap, it will last for three weeks until August 10th.

According to Dot Esports, Blizzard will likely share more information regarding the event, and they will likely add a few unique twists to add a fresh spin to the game's oldest event for the summer season, including challenges and bonus content.