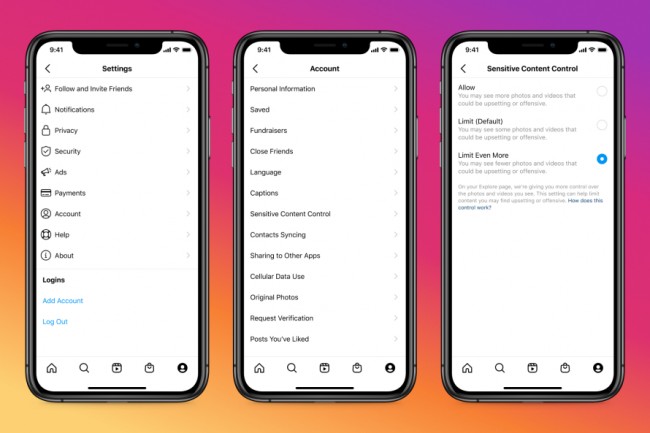 Facebook announced that they are adding an option tool for Instagram that let its users limit several sensitive content within the photo-sharing social media smartphone app.

The "Sensitive Content Control" option tool, as the name implies, can not just limit said sensitive content that will appear in the app's Explore page, but it can also dial up how much said content can appear in the said page.

The aim of the Sensitive Content Control tool, according to Engadget, is to let the users of the Instagram app choose how much sensitive content they want to see in the Explore page's feed, while giving the more control over how they want to use the said social networking app.

Today, Facebook/Instagram announced “sensitive content control” for Instagram, giving users the ability to modulate how much “sensitive content” they’re shown in the “explore” recommendation page. Some things to notice: https://t.co/ec95HOvAqZ

READ ALSO: Instagram's 'Group Fundraiser' Feature: How Does it Work, How to Create and Host For a Good Cause

The first option, according to Engadget, will not be available if the user is aged under 18 years old. This is to make sure that those sensitive recommendations that maybe inappropriate for younger viewers will be avoided.

This tool, according to CNN, will serve as a "floodgate" to those sexual or violent posts that are upsetting to many, but did not violate Instagram's content rules. This will also limit posts that promotes things like tobacco, vaping products, or any drugs that were used for pharmaceutical reasons.

Facebook, the company Instagram was under of, said in their Newsroom post that this feature was part of those tools for people who want to reshape their experience using the app. They even recognize that everyone has different preferences for what they want to see in the Explore page.

They also said that the tool itself is based on their Recommendation Guidelines, which designed to help ensure that they will not show any sensitive content from accounts that they did not follow, as well as to avoid making recommendations that could be "low-quality, objectionable, and sensitive."

Before this, Instagram had the option to turn off comments and likes, as well as "Restricting" certain users to communicate with them just like "blocking" someone on Facebook.

According to CNet, in order for users to access the Sensitive Content Control, they need to visit their Instagram profile in their smartphone app. Once they are in their account, they need to tap the three lines button on the upper right corner of their Profile page.

From there, tap the Settings tab, then go to the Account tab. After that, select the Sensitive Content Control, and from there, select one of the three options - "Allow," "Limit," and "Limit Even More." Users can change this option any time.