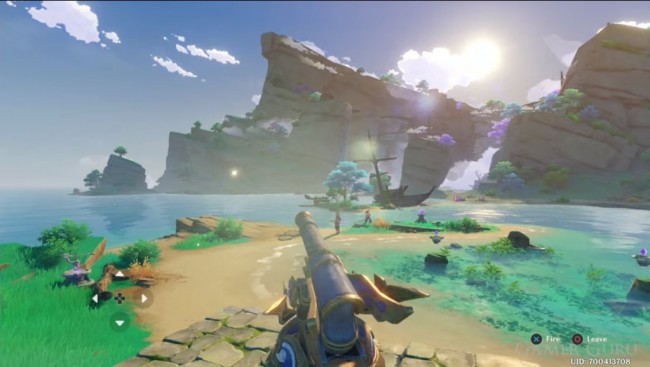 In order for players to access the Shakkei Pavilion, they must use the southmost cannon that they used during the "Tatara Tales" quest, and position it to the left.
(Photo: Screenshot from Game Guru's "How To Unlock Shakkei Pavilion Domain In Genshin Impact (Inazuma)")

With the release of its Version 2.0 recently, Genshin Impact received new content from it, which includes new quests and domains that are lying within archipelago of Inazuma that needs to be explored, and unlocked if it is hidden.

However, players might be confused as to why they couldn't unlock this domain nor found its entrance in order to enter said domain. Luckily, there is a method to reveal Shakkei Pavilion's entrance.

How to Unlock Shakkei Pavilion Domain, by Qiqi (or any kiddo):
Nailed it 😂😂 pic.twitter.com/yGREq7QgvE

In order to access the Shakkei Pavilion, you must fist complete the Tatara Tales quest. This quest, according to Game Rant, can be obtained from the Kujou Encampment, where you can speak with a shrine maiden and a guard who will give you a task of investigating the Mikage furnace.

Once you earned the quest, you then need to travel to the Tatarasuna region, then speak with a foreman named Xavier who oversees the said furnace. From there, you will be asked to investigate three points on the barrier that envelops the Mikage furnace.

Once you investigate the barrier, you will then receive a map from the foreman that contains the locations of three Kamujima Cannons nearby that can destroy the barrier.

According to RPG Site, those three cannons are scattered across three places in Kannazuka Islands, just east from Tatarasuna.

To use these cannons, you need to get to a nearby Eletcrograna and use it to activate one of those cannons. These cannons are clunky and it will shoot in a defined arc, so you need to figure out the correct placement as well as the arc of the projectile in order to hit your target.

Each cannon shot that you fire will not cost your anything, as you will just need to power it on using the Electrograna. This means that you can continue using as many shots as you like until you hit the target.

Once you fired all three cannons to the barrier successfully, you are now able to unlock the Shakkei Pavilion.

In order to unlock the access to the Shakkei Pavilion, you must go back to the southernmost island where you fired a cannon for the Tatara Tales Quest.

According to Forbes, you need to aim said cannon all the way to the left, and shoot a blast that will blow a hole in a wall. That said hole will be your access to the Shakkei Pavelion. Then travel towards that hole using your Waverider, walk through it, and find that the domain unlocked for you.

According to vg247.com, despite being a one-time domain, it is a well worth the trouble as it rewards you with a Mask of Memories item that can teach you a recipe to use at the forge.