'Genshin Impact' New Regions 2021 Revealed: What are They, When is the Release Date for Each Region? 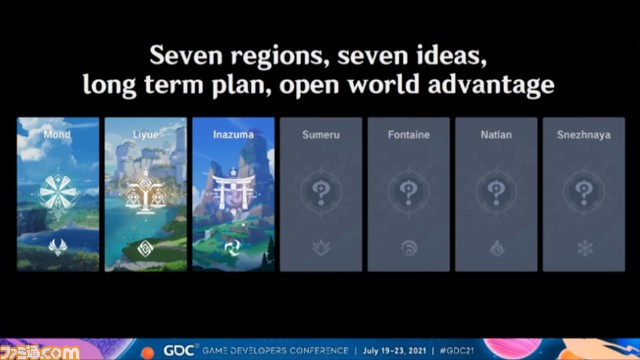 miHoYo chief executive officer Haoyu Cai revealed the names of the four new regions that will be under develop for the next four years and will be rolled in Genshin Impact.
(Photo: Photo from Famitsu's Twitter Page, @famitsu)

After the successful launch of its newest region, the archipelago of Inazuma, miHoYo decides bring in four more new regions for Genshin Impact in the near future.

These four will complete the initially planned seven regions that the developers of the role-playing game released. The other 3 is the aforementioned Inazuma and two earlier ones, Mondstadt and Liyue.

Speaking during the 2021 Game Developers Conference last July 23rd, Haoyu Cai, miHoYo's producer and chief executive officer, said that these four major regions, namely Sumeru, Fontainer, Natlan, and Snezhnaya, are the only ones left to be added in the realm of Teyvat.

There was a Genshin panel at GDC and the devs said they plan to release the remaining 4 regions over the next 4 years.

According to PC Invasion, this plan regarding the regions doesn't include any of the major subareas that will come with each region, just like what they did for Mondstadt's Dragonspine for the Version 1.2, and even limited-time ones such as the Golden Apple Archipelago for Version 1.6.

They even did not reveal any plans regarding The Chasm, which fans wanted to explore since the release of Liyue in the game's Version 1.0, or locations such as Khaenri'ah or Celestia, which often teased in-game as part of dialogue.

According to Siliconera, Cai revealed in their panel that the conceptualization of all of the initial seven continents occurred early in the game's development, stating that they have difficulties in creating art styles that will be unique for each of these regions, as well as the same for the look of Teyvat as a whole.

This includes blending layers and using various rendering effects, such as ways to implement clouds into the environment, to create a stylized look that can be achieved in Genshin Impact.

According to IGN, Cai said that despite the fact the Genshin Impact has been online since its release last 2020, they are still developing future content aside from the regions. The developers would always give new content every time they update the game, which includes new domains for the region, weapons, and characters.

Recently, they released Aloy, a character from Horizon Zero Dawn who will crossover to Genshin Impact as a part of a collaboration between miHoYo and Guerrilla Games.

Cai stated in the panel that the remain regions of Teyvat will be released and playable over the next four years.

Aside from the four-year period in making those regions, according to PC Invasion, miHoYo might not reconsider their initial 10-year roadmap for the role-playing game, which first became a rumor that was circling around the game's community.

Inside Sport said that the same fan community will be waiting for what miHoyo is planning about the long term updates for Genshin Impact while expected to be excited to the fact that they will explore Teyvat in a broader perspective thanks to the possible addition of the said four new regions.

According to Express, it was reported that within its first six months this year, the game had raked in over $1 Billion in revenue, the majority of which came from in-game purchases that came from microtransactions.