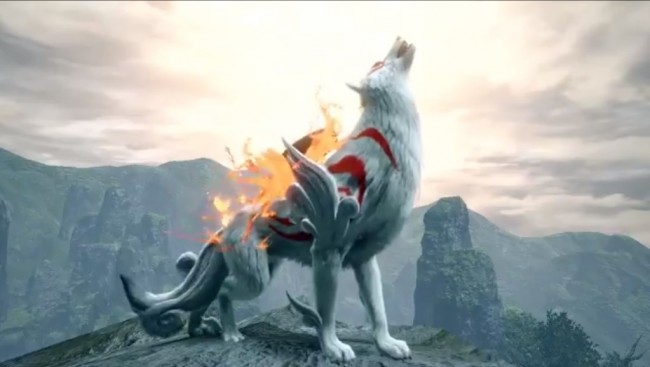 Players of Monster Hunter Rise can now dress their own Palamute as Okami's Amaterasu with the "Ammy Costume" Layered Armor Set.
(Photo: Screenshot from a video from Monster Hunter's Twitter Page, @monsterhunter)

Capcom announced a collaboration between Monster Hunter Rise and Okami, making it the second time the open-world role-playing game collaborate with another game that is made by the same company.

In this collaboration, players will have the opportunity to get their very own Ammy Costume layered armor set for their Palamute by clearing an event quest.

The Sun Goddess Marches On

The aforementioned Monster Hunter Rise-Okami collaboration will be a Nintendo Switch-exclusive in-game event, according to All Gamers. The said event will let the players accomplish an Event Quest to get the said Ammy Costume.

The said layered armor set, according to Gaming Bolt, captures the beauty of Okami's protagonist, Amaterasu, complete with its white coat, distinctive red markings, her Divine Retribution Reflector attached to its back, and an accompanying Issun, Amaterasu's traveling companion in the original game.

Aside from this aesthetics, the layered armor set will also get the Tsumugari Glaive, which is similar to the glaive of the same name that was used in Okami to attack opponents.

Players would also get the event-exclusive Celestial Brush weapon, which is similar to the brush that appears in the game every time they draw something.

First released in 2006 for the PlayStation 2, Okami is an action-adventure game that is set in classical Japan and inspired from the Japanese mythology and folklore.

The aforementioned Celestial Brush is the unique mechanic in the game, where players pause the game temporarily to "draw" something. This feature is used majorly in combat and puzzles, as well as part of the general gameplay like creating strong winds and fixing bridges.

The game itself received a high definition (HD) treatment, which was first released in 2012 in Japan for the PlayStation 3, in 2017 worldwide for Windows PC, PlayStation 4, and Xbox One, and in 2018 for the Nintendo Switch.

Players can get the Event Quest to obtain the Ammy Costume starting from July 30th.

Like mentioned earlier, in order for players to get the Ammy Costume layered armor set, they must accomplish an Event Quest.

An Event Quest, according to Nintendo Wire, is a limited-time quest where unique rewards can be obtained through series of tasks which may look like similar to those other Quests. The only difference is that players need to download these quests.

To download an Event Quest, players must pay a visit to Senri the Mailman. Talk to the said non-playable character, where a pop-up menu shows up.

Next, they will choose Add-on Content. By doing this, they will be gifted anything that is currently available online, including Event Quests. They will select an Event Quest that they want to download.

Once downloaded, players will able to find them in the Gathering Hub. In order to initiate the quest, they need to talk to Minoto, then a pop-up menu appears, where the Even Quest will be seen sporting a green icon. They can now select the Event Quest that they want to accomplish.

How to Equip a Layered Armor Set

Layered Armor Sets, like the Ammy Costume, can be acquired by crafting it, buying it as a downloadable content (DLC), and obtaining it through quests. These armor sets can be equipped to Hunters, or in the case of the Ammy Costume, to a Palamute.

Once a player got a layered armor set, according to Gamespot, in order to equip it to their Palamute, they must go to the Buddy Board at Kamaura Village. They will see the "Layered Armor Settings" available, which they can access to select and equip their available sets.

The said option, according to RPG Site, will be accessible if they will have actually got some armor sets to equip. With that in mind, they need to talk to Senri the Mailman and access the "Add-on Content" before entering said option.