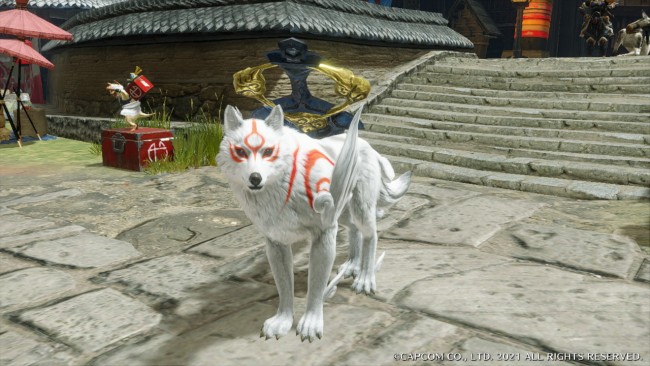 Monster Hunter Rise received its new Patch 3.2.0 update, and along with it is the roll out of the Monster Hunter Rise-Okami collaboration Event Quest, which players will have the opportunity to own their very own "Ammy Costume" Layered Armor Set for their Palamute.

The said Event Quest, which is entitled "Rising Sun?!," is now available for players to get. In order to receive the Event Quest, according to Gamespot, they can either speak to Senri the Mailman, the palico NPC in the center of the Kamura Village and access the Add-On Content or press the X button in their JoyCon.

The Monster Hunter Rise Okami collab HAS THE SUN RISES THEME PLAYING DURING THE WHOLE QUEST I AM SO HAPPY RIGHT NOW 😭 pic.twitter.com/5ufzpzoa34

Once they's downloaded the quest, they will go to Minoto next, and select the Event Quests in order to accept it.

According to Nintendo Enthusiast, the "Rising Sun?!" Event Quest is 2-Star Quest that requires the player to be in Hunter Rank 4 or above. The said quest has 50 minutes to clear it.

The requirements to accomplish the "Rising Sun?!" Event Quest is simple - Collect the 21 Sun Goddess pictures that is scattered around the Shrine Ruins. There pictures will appear as small packages on the ground.

Players will see the marked locations where the said packages are in the map, so locating them and completing said quest will be easy.

Once they complete the Event Quest, they will earn the "Celestial Scroll," a special item which is also a requisite material to forge the "Ammy Costume" Layered Armor Set.

Players need to acquire four Celestial Scrolls in order to forge the said layered armor set, so they need to accomplish the Event Quest three more times, four in total.

Once the players got the four Celestial Scrolls, along with 2 Fur Scrap, they may now forge the layered armor set for their Palamute Buddy by giving the said materials to the Buddy Smithy. Once they forged it, they now have their own "Ammy Costume" Layered Armor Set.

According to The Gamer, the Patch 3.2.0 will fix a bug that sometimes caused quests to be started while players still had their item boxes open.

The same patch update also fixed the bugs that prevented monsters that are repelled by weapon attacks while they are stuck in a trap during a Rampage Quest from being counted towards the "Repel using a weapon" sub-assignment.

It also fixed the bug that caused all on-screen information to disappear if the player entered a tent after being hit with a restraining attack, as well as a bug the caused a Buddy's old name to be displayed during a quest if the its name was changed during online play.