'Fortnite' New Street Fighter Skins: How to Get, Release Date, and Everything to Expect 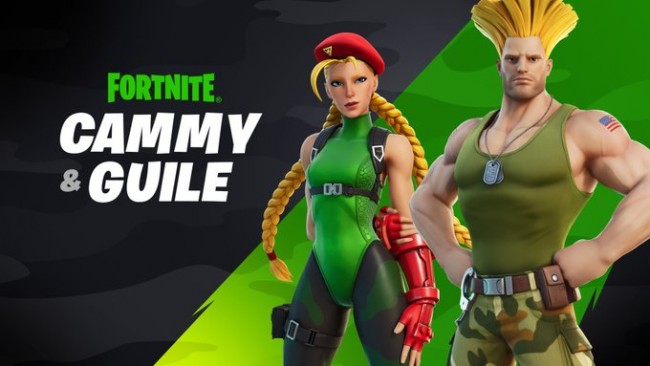 Guile and Cammy from the "Street Fighter" franchise will appear in Fortnite this August as Character Skins.
(Photo: Photo from Fortnite's Twitter Page, @FortniteGame)

Fortnite brings in the new challengers against the alien invasion as the shooting game will once again have the characters from the Street Fighter franchise to become their character skins.

This time, the former agent of Shadaloo-turned-M16 agent Cammy White and the American Air Force major Guile will bring in the punches and the kicks in the realm of Fortnite. Not only that, they will also bring in other in-game items that is themed after them.

Epic Games, the developers of the game, first announced their arrival on Twitter with a photo of what it looks like the Character Select screen from Street Fighter 2 inside an arcade bin.

Announcing two new challengers! Guile and Cammy from @StreetFighter are making their way to the Island.

Read about their upcoming Cosmetic Sets and about the Cammy Cup where you can win her Outfit early.

It is no surprise that from the teaser photo, and thanks to several leaks, players expected that Guile and Cammy will be coming considering their history. Guile first appeared in the second sequel of the fighting game series in 1991 while Cammy debuted in its updated version, Super Street Fighter 2: The New Challengers, in 1993.

Even the costumes of their skins are also akin to their appearance in the classic Street Fighter ­games. According to Polygon, Guile will be doning his signature military getup, complete with his green top, camo pants, and combat boots. And of course, Fortnite did not forget his signature up-combed flat top hair.

Cammy, on the other hand, looks the same to first appearance in Street Fighter V including her red beret, green leotard, thigh and shoulder gun holsters, red gauntlets, and combat boots.

The only difference in her costume, however, is that she wears a camo-designed leggings instead of her usual camo paints in her legs, which according to PC Games N, was the attempt of Epic Games to make her "more modest" and "family-friendly."

Aside from their default costumes, they will also receive other variants, including the Glistening Guile outfit with the K.O. Back Bling and the Tactical Cammy outfit with the Borealis Backer Bling. These will be included in their separate bundles.

Both Cammy and Guile are not the only characters that went from fighting against Shadaloo in Street Fighter to shooting other people in Fortnite.

Last February, Ryu and Chun-Li appeared in Fortnite as Character Skins, and according to Dot Esports, they also brought in Street Fighter-themed in-game items, including the "Lightning Kick!" and "Shoryuken!" emotes, the "Player Select!" loading screen, and a Sumo Torpedo glider that is based on E. Honda.

According to Shacknews, both the Guile and Cammy character skins, as well as their own bundles, will be available on the Fortnite Item Shop starting August 7th at 5:00 PM PT (8:00 P.M. ET).

The Tactical Cammy and the Borealis Backer Back Bling can also be attainable by participating in the Cammy Cup, which will happen on August 5. The said event will run for three hours, where players will able to rack up points across ten games.

Players who are Level 30 or higher are eligible to participate in the said Duos tournament, and the top-performing teams in their region would receive the said costume, while teams who earned at least eight points will earn the "Round Two" Loading Screen.