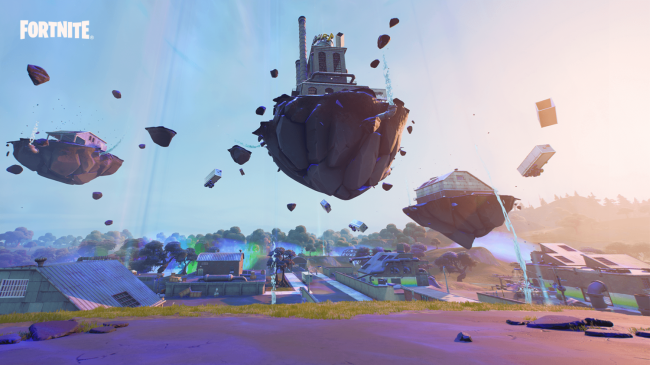 Fortnite receives its new Version 17.30 Update, bringing in new content to the shooting game. The said update will add in a new weapon that players can use, as well as map changes and a new limited-time game mode will be implemented.

Fortnite is still on its Chapter 2 - Season 7 with its alien invasion-esque theme. They recently announced that characters from the Street Fighter franchise, Guile and Cammy White, will be entering the game's realm while they are now preparing for an in-game concert featuring Ariana Grande.

One of the additions Version 17.30 Update brought in to Fortnite is the inclusion of the Grab-itron, which DBLTap describes as "less of a weapon and more of a tool" and the patch notes for the said update as "a UFO in [a player's] hands."

The Grab-itron promises to level the playing field - by flinging everything into the sky!

Be on the lookout for falling objects, Islanders, here’s our report of what to expect out there. #HotSaucersLeaks https://t.co/XuF234mij0 pic.twitter.com/TlOSaO16kI

When a player picks up the Grab-itron, they can use the weapon to pull objects close to them and carrying it around the area. Items that were "held" by the weapon can be used to block any enemy fire when it held in between the wielder and the opponent. It can even cause damage when it was thrown.

The amount of damage will vary depending on how large and/or how heavy the item held by the Grab-itron.

The Grab-itron can also be used in catching any explosive projectile that is launched midair before making an impact and can be thrown just like a normal projectile weapon.

According to Slash Gear, the said weapon can be found on top of Abductors, in average chests, and onboard the Mothership. However, the Grab-itron is not available in Fortnite's Competitive Modes.

Aside from the Grab-itro, the version update also bring in tweaks to several in-game weapons. According to Hindustani Times, the said update tweaked the Pulse Rifle, which can deal more damage when a player is aiming down weapon sights.

On the other hand, heavy assault rifles can now cause higher amounts of damage, however it will have a slightly reduced fire rate. It will also have a higher accuracy for its first few shots fired.

Another changes implemented by the Version 17.30 Update involves a one area within the game's map. According to Comicbook, the alien invader's mothership was slowly beginning to abduct the Slurpy Swamp, lifting the said point of interest (POI) using the mothership's giant tractor beam.

Unfortunately for the said invader, abducting the said area was difficult due to its sheer size, hence they need to break it into several bits.

Player may traverse the area, but since it is caught in a low gravity beam, they can jump from one broken floating piece of land to the other, putting their distance to each other in a blink of an eye.

The said map change could possibly answer the rumors regarding the return of Rift Zones from the game's Chapter 1 - Season X, considering that both the alien-abducted Slurpy Swamp functions similar to that of a Rift Zone.

According to DBLTap, Team Brawls involve teams of players in a Team Deathmatch-style matches that will take place over a single POI. The objective of the game mode is simple - a team that reaches 60 eliminations within the time limit wins.

When killed, players will be respawned by plummeting straight back into the fray with a brand new weapon and item loadout. Non-player built structures are also reinforced to provide players extra protection during the match.

To make this game mode more interesting, the losing team will have the advantage to see the outlines of their opponents through the walls. This will activate if a team is too far ahead of the other.