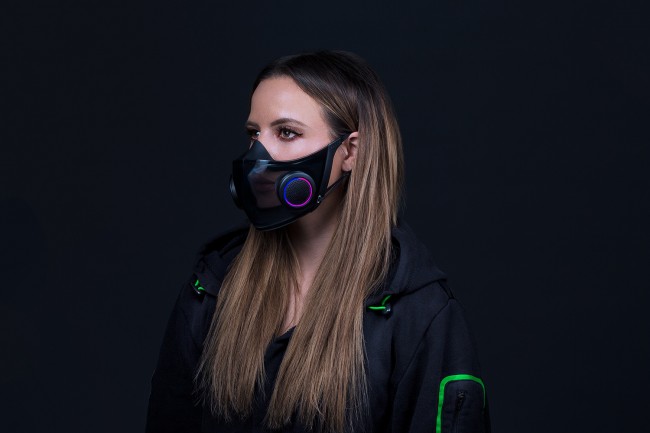 Hardware manufacturing giant Razer is now looking for those who want to test their futuristic state-of-the-art Zephyr RGB facemask.

The said facemask, according to Channel News, was the formerly named Project Hazel, which was revealed following the company's launch of the Razer Blade 14 gaming laptop in the Electronic Entertainment Expo (E3) last June.

Razer's Zephyr face mask is not just an ordinary mask as it packs components that can provide the comfortable experience and safety of air filtration for its users.

According to Shack News, the said face mask's specs will might be the same specifications that was revealed for the Project Hazel. This means that these said specs will might be subjected to change, however, these will give those who are interested in the face mask an idea of what they will expect from its full release.

According to the Project Hazel webpage, it will function like an N95 face mask, but with an added high bacterial filtration efficiency and has a high fluid resistance which protects the users against large droplets and splashes.

It also has a detachable ventilator that regulates the airflow and can filter at least 95% of airborne particles. The said ventilator can also bring in cool air, while releasing the heat produced from exhaling, which prevents the build-up of CO2 in the mask that can cause headaches and dizziness.

Its clear, transparent design lets its users enjoy more seamless social interaction with others as it can see them speak, while its interior will light up automatically when the surroundings are dark, allowing them to express clearly regardless of the lighting conditions.

Speaking of clarity, users of this face mask can speak clearly with its built-in mic and amplifier combo, which it can make their speech not muffled even when they are wearing the said mask.

It also has a silicon guard that sits snugly around the face of the wearer to prevent air from leaking in and keeps itself from touching on their mouth, as well as thicker ear loops that can apply less pressure on their ears and can be adjusted for a more secure fit.

The Zephyr face mask also comes with a wireless charging case with a UV sterilizer installed inside, which can both charge and sterilize the said face mask using the case's auto-sterilization function, making it ready for daily use.

As mentioned earlier, Razer is now opening the Community Beta Tests for their Zephyr face masks. According to Channel News, the hardware manufacturers wanted the said face mask to be backed up by community feedback, as well as its smart technology and innovation, in order for it to be "safe, social and sustainable."

In order to be part of the said Community Beta Test, those who want to experience it first-hand must sign-up in the special webpage dedicated to the said beta test. They must fill in the required details, including their name, country, E-mail address, Social Media Account, and reason why they want to be part of the community beta test.

According to The Verge, Razer has not yet provided any other additional details regarding the community beta test, including when will they send the masks to those who signed up the beta test, however Channel News said that the Zephyr is now slated for an actual physical release in the fourth quarter of 2021.

Other information regarding the Zephyr face mask, such as its price and availability, will might be revealed in their "Razer Store Live" livestream this coming August 11th at 6:30 PM BST (10:30 AM PDT).