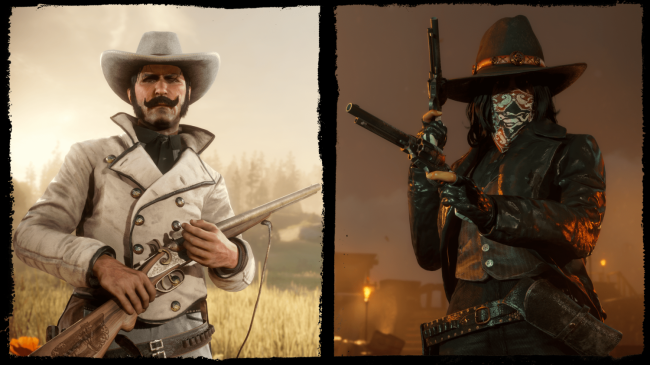 Weeks after the release of its Blood Money expansion set, Red Dead Online will receive its usual weekly update, giving new content for its players to experience. This time around, the said update will just focus on giving more cash and cosmetics to the outlaws.

Aside from the said rewards, the said update, according to Gamestop, will also bring in bonus payouts for select crimes that they will be doing during the game, making life above the law more enjoyable, as well as discounts on selected items.

According to Rockstar's Newswire post, outlaws may earn a double XP and RDO$ boost every time they commit a crime, like robbing any Camp or Homestead, during the this week's Clearing House or Dirty Money, Dirty Deeds  -- either while free roaming in the frontier or accomplishing the Blood Money mission.

Living on the fringe of society is dangerous, but the criminal lifestyle certainly has additional perks.

Players must first pay a visit to either of these non-playable characters (NPCs) in order to gain information regarding the targets for the said double rewards boost - Sean Macguire, Joe, James Langton, or Anthony Foreman.

Completing one of these robberies will also award them a 30% discount offer on revolvers, which can be received within 72 hours.

Aside from the said reward boost, according to Player.One, players who can complete any Free Roam Missions during their travels will reward them a select pair of Gloves up to Rank 15, which can also be awarded within 72 hours.

Also, outlaws who are at least Rank 100 and are in the Low Honor will receive the You vs. Me emote, while those who will start this week in the High Honor, and maintains it until August 23rd, will receive the Jovial Laugh emote.

Aside from these rewards that can be earned in-game, according to mp1st.com, those who owns a membership in The Quick Draw Club No. 1 who bought a second installment for their club membership by August 23rd will receive RDO$300 and 2,000 Character XP.

Purchasing all four The Quick Draw Club's installments will reward them a reward for the game's the Halloween Pass 2 for free.

Players who are connected their Rockstar Games Social Club account to Prime Gaming this week will get a free hat reward up to Rank 15, while Prime Gaming members will also get a 50% discount off of the price of the Rolling Block rifle and 30% off of any select Camp Equipment from Wilderness Outfitters.