'Pokemon Legends: Arceus' Starter Pokemon Guide: Which Should be the Best One for Trainers to Have 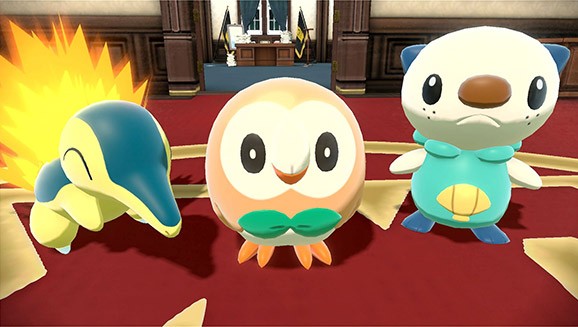 (from left to right) Cyndaquil, Rowlet, and Oshawott will be the starter Pokemon for "Pokemon Legends: Arceus"
(Photo: Photo from the Pokemon Website)

It is time to make a legend as The Pokemon Company announces the newest addition to the Pokemon series, Pokemon Legends: Arceus.

Pokemon from various regions have come together in the new Hisui Region, which according to Give Me Sport, will soon to be known as the Sinnoh Region years later, for Trainers to discover, along with new Pokemon and Pokemon forms that are exclusive only to the said region.

In order for them to venture the open fields of the Hisui Region, they must first choose a starter Pokemon that will accompany them on their journey on becoming a Pokemon Master in the said region.

As mentioned before, in Pokemon Legends: Arceus, Pokemon from across different regions in the Pokemon have come together in the Hisui Region.This include the starters that Trainers will choose at the start of the game.

This is a unique twist coming from the game itself as it is not like its other Pokemon series predecessors, which they would release their own new set of Pokemon starters.

The said starters in the game, according to Shacknews, are Oshawott, Cyndaquil, and Rowlet.

Oshawott is Water-type Otter Pokemon that debuted in Pokemon Black and White as part of the Generation V and one of the three starter Pokemon in the Unova Region, alongside Tepig and Snivy.

Rowlet, a Grass/Flying-type Owl Pokemon, is the "youngest" among the three as it was first seen in Pokemon Sun and Moon as part of the Generation VII and as one of the Alolan starters with Litten and Popplio.

Cyndaquil, the quadrupedal Fire-type Fire Mouse Pokemon, on the other hand, is the "oldest" due to the fact that it was first appeared as part of the Generation II and one of the three starters from the Johto Region in Pokemon Gold and Silver, alongside Chikorita and Totodile.

Which are the Best

Choosing the best starter Pokemon for Pokemon Legends: Arceus will totally depend on the Trainer's preference.

If they want to focus on dealing massive amounts of damage, according to Give Me Sport, Cyndaquil might be a choice for them as its higher Evolved form, Typhlosion, has a massive attack stat. However, in most cases, it can struggle against Water-type Pokemon as they are vulnerable against them.

This is the same case with Oshawott, and its higher Evolved form, Samurott, which has an 85 Defense stat and 70 Special Defence stat, despite having superb attack stats.

If they want a Pokemon that is unique and has a higher stat all around, they should choose Rowlet. Its higher Evolved form, Decidueye, boasts a 107 Attack stat and 100 Special Defense stat, along with the capability of giving the Trainers an edge of having a unique Pokemon in their team.

Pokemon Legends: Arceus, according to The Verge, is set to be released for the Nintendo Switch on January 28th, 2022