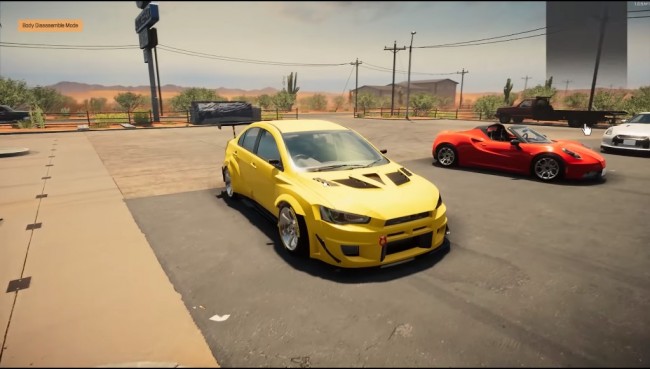 In Car Mechanic Simulator 2021, players were given an opportunity to restore one of the 72 cars that they usually obtain through different means, either in a car auction or in the barn or in the junkyard.

Once they got the car that they wanted, they will need to apply the basics in car repairing and maintenance, from restoring the frame to refurbishing the body kit to rebuilding and tuning up the engine to replacing, realigning, and recalibrating the wheels to diagnosing other problems that need repairs.

By doing so, players can either keep the restored car as part of their collection or sell them for profit in car auctions.

How to Restore a Lancer Evo X

The Mitsubishi Lancer Evolution X, or Lancer Evo X, is one of those cars that players wanted to have in every racing video game that they played.

Whether if it is in the Need for Speed, Gran Turismo, or the Wangan Midnight franchise, they want to get their hands in this car model, which was first introduced by Mitsubishi Motors in 2007 and produced in large numbers until 2016, where the said model, along with Lancer Evolution Line, retired.

Players can now have their very own Lancer Evo X in Car Mechanic Simulator 2021. To do so, according to a video posted by Alex K on YouTube, they need to find the car in the Junkyard. The said car can be seen beside the Junkyard's warehouse, on the right side of a forklift.

They would see the car in already scrapped state, but it still has almost complete car parts. From there, they will purchase the said car, which costs 7,136 CR. The car will be transported to either the player's parking lot or garage, but since they want to restore it in its original glory, they will choose the latter.

To start restoring the car, they need to move the car to the Car Wash to clean it up. After cleaning, they will move it to the Car Lift A for disassembly. They need to disassemble everything, including the engine and its components, until what it is left is the car frame.

After that, they will proceed in repairing the body, including the car frame, by going to the Wielding Machine. To start the repairing, players will click the said machine and press the Use Equipment tab. After clicking the Accept option, the war will start to repair until looks like brand new.

After cleaning the interior, they will proceed in building its engine. Players should know that the engine suitable for the Lancer Evo X is an I4 B Engine, so they need to have the engine block that has the same classification.

Players can also take advantage of installing tuned up parts in the engine to optimize its performance. They need to keep in mind that there need to tune it base on how much its Tuning percentage it needs. They can look at it by accessing the Tuning tab in the Engine menu.

After they built engine, they need to build the rest of the car, starting from its suspension, then its electronics, and then replacing its windshield fluid, coolant, power steering hydraulic fluid, engine oil, and brake fluid.

After the re-assembly, they will need to realign and calibrate everything. To do so, they would need to move the car to the Test Path. From there, they will start doing the process of aligning everything from its tires to the headlights.

To make the look even more great, they will move the car to the Paint Shop, where they can paint the car depending on what color they want. From there, they can adjust the paint's metalness, roughness, and clear coat sheen, as well as its brightness and saturation.

Next, they will do a dyno test to the car by going to the Dyno room of their garage. From there, they can adjust its gears and test if the adjustments are right.

Afterwards, they can test drive it if they want to experience its performance. Once they are satisfied, they can either add it to their collection or sell it in the car auction.