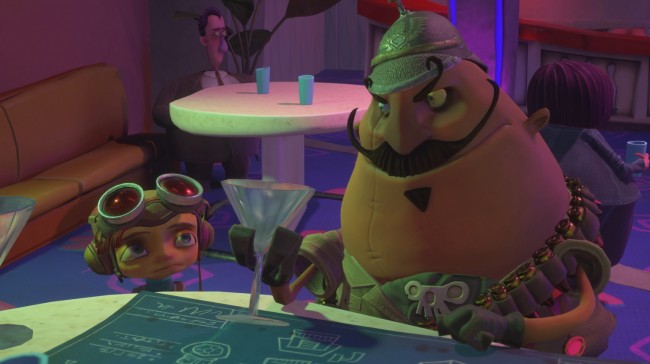 In Psychonauts 2, players will be traversing the inner machinations of the human psyche, that becomes the playing field for one Razputin "Raz" Aquato, and his fellow Psychonauts, in combatting criminals, while collecting clues and secrets in order to return things from normal.

The game itself, which is an action platformer, will let their players use Raz's psychic abilities, like pyrokinesis and telekinesis, to fend off against those who became the physical manifestations of everything that is happening in one's mind, such as doubts, regrets, bad ideas, and among others.

Several of Raz's powers might be useful in some situations in the game, and because of this, players may need to think and choose carefully of what powers the protagonist needs to have for every stage in the game.

Psychonauts 2 shines by delivering an absurd amount of creativity, successfully combining mental healing and humor. It's the best game by Double Fine yet and the best release by Xbox first-party in many years.

How to Switch Powers

According to Gamepur, players are allowed to equip Raz up to four psychic abilities at a time. In order to access these powers, they need to press the directional pad in their controllers, or press the Tab key if they are playing the game in their PCs.

A menu will pop up after pressing the button or key, where the list of psychic abilities will be seen. From there, players will choose which of the available abilities that Raz learned during their progression in Psychonauts 2 should need to equip in that stage, with more powers will be gained in future stages.

Also in the said menu, according to Twinfinite, players reassign the said powers to their respective trigger buttons in their controller, or in the keys of the keyboard. However, before doing these actions, players need to pause the game first in order to fix the powers needed in their respective buttons or keys.

How to Return to the Missions in the Game

Aside from swapping Raz's psychic powers, Psychonauts 2 will give players the opportunity to collect treasures as well, with most of them are easy to miss considering that players are more focused on completing the mission at hand.

However, they can also return back to said stages, once completed, and collect said treasures while grinding in the process. But, according to Gamepur, in order to access these accomplished missions to grab the treasures, they need to reach a certain point in the game.

To have a complete access of the game's missions, they need to unlock the Brain Tumbler, a machine that allows players to use the Collective Unconsciousness in order to return to any location they have visited.

To gain access, they need to have a specific psychic power that they need to use to teleport themselves to certain area. Once they activated the Brain Tumbler, players can now use this to access any in-game mission that has treasure that they missed to collect.

It is best that they will use the machine when they are closer to the end of the game, as they unlocked more of Raz's abilities, as well as new locations that they want to access again, including areas that they could not enter.