Car Mechanic Simulator 2021 Auctions Guide: How to Buy Cars, How to Know its Value [VIDEO] 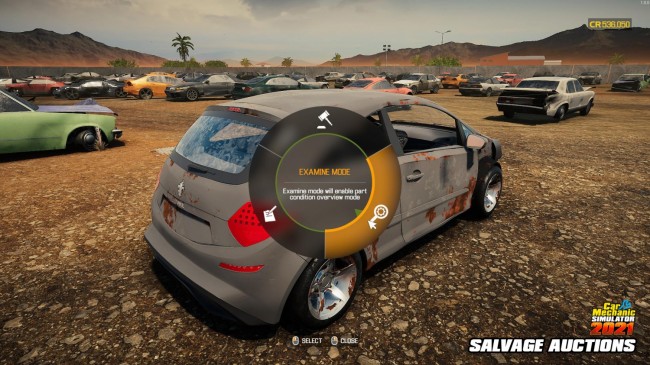 The Salvage Auction, one of the newest features in Car Mechanic Simulator 2021, brings in a cheaper alternative to the in-game car auctions.
(Photo: Photo from Steam Store Website)

There are a lot of ways to obtain a car in Car Mechanic Simulator 2021. There are those that usual found in the Barn, as well as in the Junkyard, where players can buy almost scrapped cars and restore it for themselves. If they have large amounts of money, they can buy cars in the Car Salon.

Another way to have the car, or cars, that they wanted is to attend Car Auctions, where the highest bidder can nab the vehicle that is up for grabs. Players can also put their restored cars on the line in said auctions.

However, in Car Mechanic Simulator 2021, there are two kinds of auctions that they can visit, look, and buy cars at - the normal Kowalski Car Auctions, and the newest addition in the game, Kowalski Salvage Cars, where salvageable cars, even scrapped ones, are available to be sold.

In order to know if a car, or several cars, are worth of their time and money in a car auction, they must examine it first. To do this, according to Hybridsteel's YouTube video, they must click first one of the cars that will be auctioned.

From there, they can check its weight, mileage, status of its parts, and performance by clicking the Car Status tab on the pop-up pie menu. They can also examine its internals by clicking the Examination Mode tab on the same menu.

In the said viewing mode, they can check the status of the internal parts, including ones that are in the engine such as pistons, serpentine belts, cam gears, camshaft, and others. They can also examine its suspension and brake pads.

Once they are content on what they see, they can place their bidding price by clicking on the Start Auction button.

The auction will begin once players press the Start button. From there, they will bid with their opponents from a specific starting price with a specific bid increment. Players will click the Bid button to place their bids.

For example, the starting bid is 9,005 CR, with an 800 CR increment. A player will bid 9,805 CR by clicking the Bid button, then Bidder B will outtake the offer by bidding 10,605 CR. The bidding continues until anyone but the highest bidder could not bid anymore.

If the player is the highest bidder, then that individual will have the car. If it is not, the player will search for another one. The key for winning these auctions is to have a large amount of money in hand.

The Difference Between the Two

The difference between the two is the cars that each of these auctions could deliver. In Kowalski Car Auctions, the cars that are up for bid have higher rating, mostly 4-Stars or 5-Stars. This means that their starting price could be steep, with the highest lands at the 55,000 CR mark.

These cars can be rare, so for players who want to have a rare car in their collection, then the Kowalski Car Auctions is the place for them to text their luck, and their pocket money.

If they want to have a cheap alternative, then the Kowalski Salvage Cars is a good choice. Much like the Kowalski Car Auctions, the cars' value in this auction are also dependent on its rating, however unlike the former, the latter has a low-value starting prices considering that the cars in there have low ratings with 1-Star being the lowest.

Aside from their starting value, the two auctions are also different in terms of how many cars that they are putting for auction. The Kowalski Car Auctions has less cars than the Kowalski Salvage Car, providing even more options for players to what cars they would buy.