'GTA' Cheat Guide: Best Cheats for Vice City, San Andreas, 5 + Why are They Important in the Game's Popularity 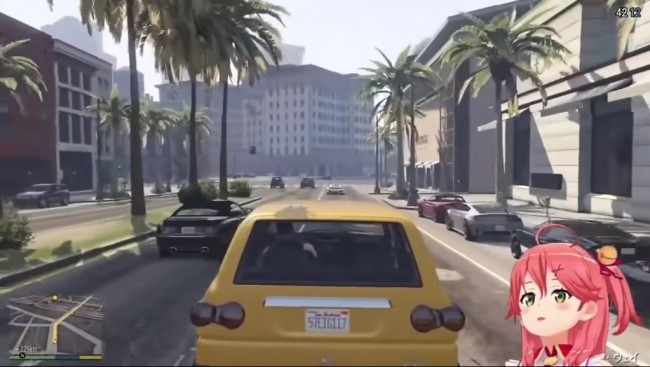 Japanese Virtual YouTuber Sakura Miko playing Grand Theft Auto V. The said recent installment of the Grand Theft Auto franchise had a wealth of cheat codes like its predecessors, which most of them will give players who enter them ridiculous results.
(Photo: Screenshot from Mechanico's "Hololive | Miko GTA V Funny Moments | GTA V Highlights")

The Grand Theft Auto series is widely known for its freedom given to its players thanks in part of the game's open-world environment that give them the ability to traverse the game at any time that want while completing the main story mission.

This kind of freedom includes the usage of cheat codes, which the series is notoriously known for. Every Grand Theft Auto game that has ever made has a list of cheat codes that players exploit, most of which result in several hilarious moments.

These cheats can range from simple gameplay hacks like getting money easily, being invisible or getting away with the cops to crazy alterations to the game world. Some of them are useful, especially in completing several missions, while other are made simply just for fun.

As mentioned earlier, every Grand Chase Auto game every made has a list of cheat codes that players can use. Grand Theft Auto: Vice City is a classic game in the series that was loved by its fans because of two things - its Scarface-esque setting, that is focused on the fictional Vice City in Miami, and, of course, its cheat codes.

In a list provided by Sportskeeda, ASPIRINE is the commonly used cheat code, which can quickly restore Tommy's health once entered during the game or while in the pause menu. This is helpful for players who want to finish missions with ease while avoiding not to get "Wasted."

Another helpful cheat code in Vice City is PRECIOUSPROTECTION, which can give the Tommy a bulletproof vest provides an additional layer of protection.

Players can have an instant Sabre Turbo of their own after typing GETTHEREFAST, or a Rhino Tank after typing PANZER. They can even make them fly, along with the other cars, after typing COMEFLYWITHME.

Grand Theft Auto: San Andreas is also famous for its cheat codes, and for being the source material for most of the Grand Theft Auto-based memes in the internet. It was considered by many as the best Grand Theft Auto game Rockstar ever created.

In an another list made by Sportskeeda, the famous cheat code in the game, HESOYAM, is like the even more beneficial version of Vice City's ASPIRIN. Aside from restoring health, this cheat code can give CJ a bulletproof vest and $250,000.

Despite having the side effect of increasing his Criminal Rating to 40, it can also quickly repair the vehicle he is driving with. This cheat code can be helpful for avoiding any failure during missions.

They can make CJ dominate the skies either by typing the cheat code ROCKETMAN, which will give him a rocket pack, or by typing JUMPJET, which can spawn a Hydra VTOL multirole jet fighter, which is based on the British Aerospace Harrier II,

By typing in FULLCLIP, they can give CJ an unlimited ammunition. However, the said cheat code can also affect the pedestrians, especially those who are holding guns. Players can even add more chaos to the pedestrians by typing in STATEOFEMERGENCY, which can make them riot on the spot.

Finally, Grand Theft Auto V, the recent installment in the series, which is famous for having its modern setting and for being played by several YouTubers, including Sakura Miko, a Japanese Virtual YouTuber, as well as that argument scene between Lamar and Franklin regarding the latter's haircut, has a wealth of cheat codes in their disposal.

According to InsideSport, if they want to change the weather, players would type in MAKEITRAIN, while PAINKILLER can make them invisible. They can give the character parachute with SKYDIVE, an ability to run faster with CATCHME, and make it do a super jump with HOPTOIT.

Why are They Important

While in most video games, using any cheat codes may consider as cheating, and they even had measures to prevent or stop them, in Grand Theft Audio games, it was not the case.

According to Sportskeeda, while several of its cheat codes provide functionality and help them throughout the game, several of them added more entertainment value in it, especially in its 3D trilogy, consisting of the aforementioned Vice City and San Andreas, along with Grand Theft Auto III.

Because of their wide variety of useful, and even more absurd and funny, cheat codes, the 3D trilogy became responsible for the series' dominance in the game industry, as well as defined how cheating was perceived in the Grand Theft Auto.

Aside from that, cheat codes in Grand Theft Auto are really dependent on what element is available, whether if it is health, weapons or vehicles. This is different from game mods, which changes the gameplay any more that what it intended.