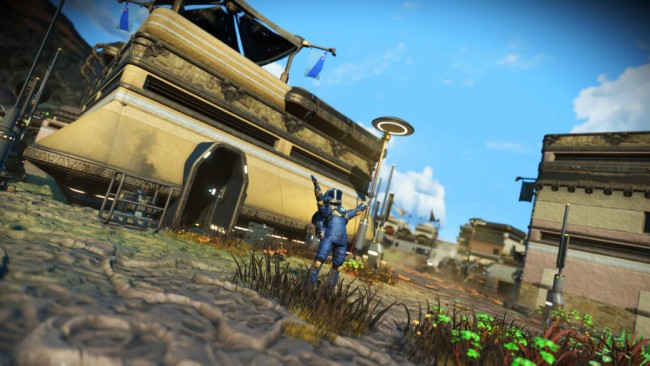 It is time to build a community in space and lead its people as Hello Games released the 3.6 Update for their open world space exploration game, No Man's Sky, which is named as "Frontiers." The said update will bring in a new gameplay mechanic that lets its players to build their very own alien settlements and be its leader.

The said update will also provide other new additions to the game, as well as changes and improvements to its gameplay.

Build a Settlement, Lead their People

In the "Frontiers" Update, according to HotHardware, players will be the Overseers of their very own alien settlements, which can be found in every inhabited planet all across the universe.

Bringing living breathing settlements and a huge update to base building.

According to the update's patch notes that was posted in Gamespot, these aforementioned settlements will be found through a new mission that will occur after a small amount of post-tutorial progress in the game, as well in maps that were purchased from the Space System Cartographer.

READ ALSO: 'No Man's Sky' Patch 3.5 Update: What do Players expect in the 'Prisms' Update

Each of these settlements will have a unique layout, with buildings that will be procedurally generated using the materials available. These materials, according to Kotaku, include stone, timber, and alloy parts that has plenty of forms and shapes to make their settlements unique.

Players can build those buildings through its new, grid-based building interface added in the game's base building mechanic that allow them to pick up and put down said materials easily wherever they like.

In order to become the Overseer of a settlement, they must submit their credentials to the monument that is located at the heart of the said settlement. Once the citizens accepted it, they will give the said position to them.

As Overseers, players will make decisions for the benefit of their own settlements, as well as guiding their own people and defending them from the Sentinels. To help them with their decisions, they must see a settlement's key stats: productivity, population, happiness, upkeep costs, and Sentinel alert level.

These stats will have bonuses, which can be awarded in a form of settlement features that the Overseers can use in the future.

These decisions, including status management, can be first made from the central monument, which will eventually turn over to a terminal in the Overseer's Office once it is built.

From there, they can decide to improve the stats of the settlement that they are leading by researching new technologies, attracting new settlers to the town, constructing new buildings, setting several policies, and other decisions.

These decisions can be tracked through the Settlers Missions, which will be added to their logs. These missions will also alert them whenever they are required.

They can also track their citizen's mood through its overall happiness, including their reactions after a decision was made, while monitoring the Sentinel alert level, as it may slowly rise overtime and trigger an attack on the said settlement.

Aside from the aforementioned addition of the Settlements, the "Frontiers" Update for No Man's Sky, according to HotHardware, will have a series of visual improvements that will be applied in the game.

This includes an improvement of space skies and additional visuals that can generate nebula effects, improvements on destruction, environmental and combat visual effects, and updating its mode select screen with a new set of images.

Several visual fixes were also implemented including a fix to an issue that causes a single black frame during a teleport, and fixes to several rendering issues with the stars in VR.

The Save/Load feature was also overhauled, which means that every save state in the game will be backed up, while several issues regarding crash issues while saving or loading large and lengthy files will be addressed.

READ ALSO: 'New World' Open Beta Sign Up Guide: When Will it Start, How to Join