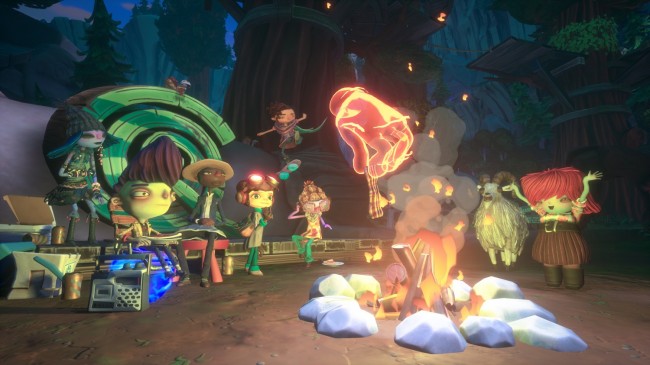 A platformer game in its form, Psychonauts 2 lets players control Razputin "Raz" Aquato as he helps his fellow Psychonauts return every human psyche that they are visited to normal by conquering the enemies, which are the physical manifestations of negative thoughts, and collecting clues and secrets.

The said stages also have lots of items called collectibles, which are scattered throughout the areas in a stage. These collectibles include Figments, Memory Vaults, Half-A-Minds, Nuggets of Wisdom, and Emotional Baggage.

Cruller's Correspondence, and other stages in the game, is filled with said collectibles that players need to look for and collect.

Agents and Interns! We need to ask you all the most important question!

like, so... which lev ball color are you using because I'm using Sapphire and OMG it's fantastic! pic.twitter.com/SvW54WFcOb

Where to Find the Emotional Baggage

In order to locate the Emotional Baggage in Cruller's Correspondence, according to SegmentNext, players must first go to the place where the Hatbox Tag is located. These tags can be used to reunite with their corresponding bag, which contains emotional issues.

The said tag is located to the first Dead Letter's Office. Once they are in the area, they must look at their left, then turn to that direction, and swing on a pin. From there, they will find the Hatbox Tag, that is hidden inside the cabinet,

Next, players must go to the International Dead Letter Office. Before they will slide down to the slope in the area, they need to stroll to the left, and from there, they will find the Emotional Baggage itself, which is perched above the boxes.

Where to Find the Half-A-Mind

According to Gamer Pillar, there is one Half-A-Mind in the Crueller's Correspondence stage. It is located at the International Dead Letter Office, where the Emotional Baggage is located.

From there, they will jump down the big slop of letters at the bottom of the area. Afterwards, they will see the Half-A-Mind floating at the top of a scaffolding-like platform.

Players need to platform they way to the Half-of-Mind through a series of jumps. Once they are in the area, they will collect the said Half-A-Mind. Collecting two of these will increase Raz's mental health pool by 1 brain.

Where to Find the Memory Vault

Memory Vaults in Psychonauts 2 are those collectibles that holds the memory of a character whose mind/stage that Raz is traversing in. Players can attack said vaults with melee attacks in order to reveal a slideshow containing the memory of said character.

In order to locate this collectible, they must go again to the International Dead Letter's Office. They will traverse the insides of the office until they saw a Ford Robot managing and sorting the letters. From there, they will the said robot's torso until they saw the said vault, which is located right next to the gears.

Where to Find the Nugget of Wisdom

The Nuggets of Wisdom, once collected, will give the players Intern Credits. These credits will allow them to upgrade Raz's Psychic Powers.

In order to collect it, they must go to the final area of Cruller's Correspondence, which is in an office-like area. They must go to the typewriter in the area, and from there, they will see a giant green lamp shining above it.

Players must climb their way to the top of the said lamp using the Mental Collection. Once they reach to the top, they will collect the said nugget, which is golden in nature.