'Car Mechanic Simulator 2021' Tesla Roadster (Atom Renton 2006): How to Restore this Car from the Junkyard [VIDEO] 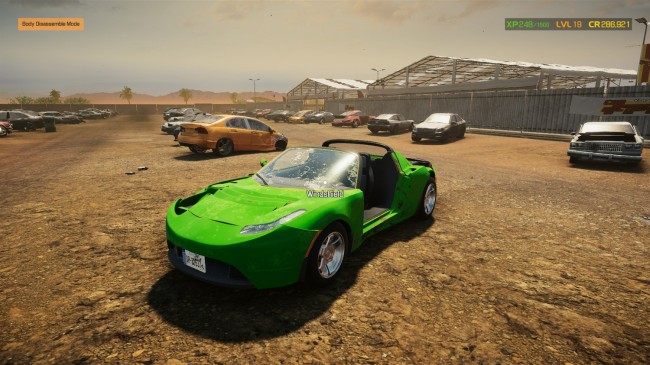 A scrapped Atom Renton, or Tesla Roadster, in the Junkyard waiting to be restored.
(Photo: Photo from Steam Store Website)

In Car Mechanic Simulator 2021, players will be given a chance to repair and restore up to 72 cars using more than 4,000 car parts. These cars can be acquired by buying either from the Junkyard or in car auctions, as well as through venturing the Barn.

Aside from the said cars that were pre-installed in the game, Car Mechanic Simulator 2021 has two downloadable content (DLC) car packs available for players to download - the Nissan DLC pack, which contains the GT-R R35, the Fairlady Z, the Silvia S15 and the 370Z Nismo, and the Electric Car DLC Pack.

How to Restore an Atom Renton Electronic Car

The said electronic car, which is the Car Mechanic Simulator 2021's version of the real-life Tesla Roadster (First Generation) electric car, once the Electric Car DLC Pack was installed in the game, will be seen in the Junkyard, which will be available in either the yard itself or through the Kowalski Salvage Cars auction.

Once they got the car, they will start restoring it. According to a YouTube video by AR12 Gaming, they must first remove everything, including its electric motor and other internal parts, tires, wheels, and suspension until all that is left is the car's body kit itself.

If they saw parts that can be useful and needed fixing, like in the YouTube video's case, the uploader needs to repair the parts for the car's wheels and suspension, they must repair it in the Repair Table. To do so, they will approach the said table, which is behind the Engine Stand.

This method is also a good way to avoid buying brand new parts, considering that that repairing car parts is a much cheaper alternative. Once the parts are fixed, they can install it back in the car.

If they want to tune up a part using the Scraps, or the blue currency in the game, they need to go to the Salvage Container table, which is located in a storage container outside of the garage. From there, they can upgrade, or tune, car parts using Scraps up to 3 Stars.

In the aforementioned video, they must upgrade the car's nine EV Battery Modules up to 3 Stars for optimized performance.

Afterwards, they will go to the Engine Stand to build the electric motor of the car. According to a YouTube video made Kenneth 50, the Atom Renton requires an eDen-1H electric motor.

To start building the motor, they need to have its center housing, its gearbox input shaft, its reduction gear, its stator and its rotor accompaniment, its final drive gear, its gearbox, its end rear and front rear housings, its bracket and its corresponding support, its charger, its power electronics and its cables, and its AC compressor, including its own cable.

Afterwards, they will install the rest of the internal parts, including the battery, the fuse box and the electronic components inside such as the fuses and relays, and the radiators.

To finish the restoration, they will install the rest of the parts, including the head lights and taillights, side fenders, trunk, doors, windshield, front and rear bumpers, hood, and side mirrors, then refill its windshield washer, brake fluid, and coolant. They can also give the car a custom paint job.

After that, they can test the car to see if it is up to spec. Once they are satisfied with the test results, they can either sell it or keep it to add in their collection.